A New Level of Earthquake Understanding 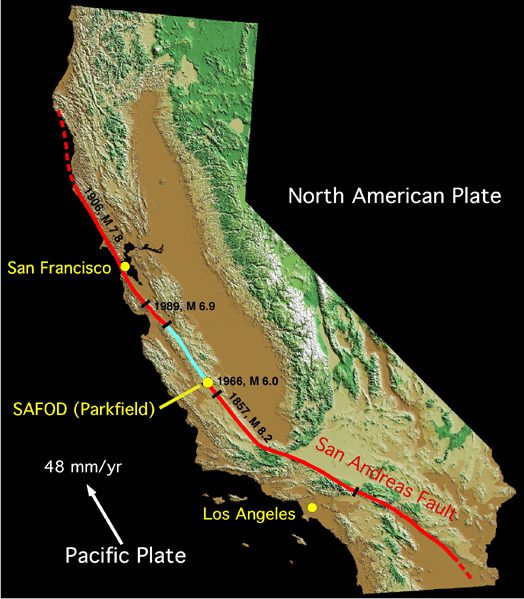 March 4, 2015—As everyone who lives in the San Francisco Bay Area knows, the Earth moves under our feet. But what about the stresses that cause earthquakes? How much is known about them? Until now, our understanding of these stresses has been based on macroscopic approximations. Now, the U.S. Department of Energy (DOE)’s Lawrence Berkeley National Laboratory (Berkeley Lab) is reporting the successful study of stress fields along the San Andreas fault at the microscopic scale, the scale at which earthquake-triggering stresses originate.

Working with a powerful microfocused X-ray beam at Berkeley Lab’s Advanced Light Source (ALS), a DOE Office of Science User Facility, researchers applied Laue X-ray microdiffraction, a technique commonly used to map stresses in electronic chips and other microscopic materials, to study a rock sample extracted from the San Andreas Fault Observatory at Depth (SAFOD). The results could one day lead to a better understanding of earthquake events.

“Stresses released during an earthquake are related to the strength of rocks and thus in turn to the rupture mechanism,” says Martin Kunz, a beamline scientist with the ALS’s Experimental Systems Group. “We found that the distribution of stresses in our sample were very heterogeneous at the micron scale and much higher than what has been reported with macroscopic approximations. This suggests there are different processes at work at the microscopic and macroscopic scales.”

Kunz is one of the co-authors of a paper describing this research in the journal Geology. The paper is titled “Residual stress preserved in quartz from the San Andreas Fault Observatory at Depth.” Co-authors are Kai Chen, Nobumichi Tamura and Hans-Rudolf Wenk.

Most earthquakes occur when stress that builds up in rocks along active faults, such as the San Andreas, is suddenly released, sending out seismic waves that make the ground shake. The pent- up stress results from the friction caused by tectonic forces that push two plates of rock against one another.

“In an effort to better understand earthquake mechanisms, several deep drilling projects have been undertaken to retrieve material from seismically active zones of major faults such as SAFOD,” says co-author Wenk, a geology professor with the University of California (UC) Berkeley’s Department of Earth and Planetary Science and the leading scientist of this study. “These drill-core samples can be studied in the laboratory for direct information about physical and chemical processes that occur at depth within a seismically active zone. The data can then be compared with information about seismicity to advance our understanding of the mechanisms of brittle failure in the Earth’s crust from microscopic to macroscopic scales.”

Kunz, Wenk and their colleagues measured remnant or “fossilized” stress fields in fractured quartz crystals from a sample taken out of a borehole in the San Andreas Fault near Parkfield, California at a depth of 2.7 kilometers. The measurements were made using X-ray Laue microdiffraction, a technique that can determine elastic deformation with a high degree of accuracy. Since minerals get deformed by the tectonic forces that act on them during earthquakes, measuring elastic deformation reveals how much stress acted on the minerals during the quake.

“Laue microdiffraction has been around for quite some time and has been exploited by the materials science community to quantify elastic and plastic deformation in metals and ceramics, but has been so far only scarcely applied to geological samples”, says co-author Tamura, a staff scientist with the ALS’s Experimental Systems Group who spearheads the Laue diffraction program at the ALS.

“ALS Beamline 12.3.2 is one of just a few synchrotron-based X-ray beamlines in the world that can be used to measure residual stresses using Laue micro diffraction,” Tamura says.

In their analysis, the Berkeley researchers found that while some of the areas within individual quartz fragments showed no elastic deformation, others were subjected to stresses in excess of 200 million pascals (about 30,000 psi). This is much higher than the tens of millions of pascals of stress reported in previous indirect strength measurements of SAFOD rocks.

“Although there are a variety of possible origins of the measured stresses, we think these measured stresses are records of seismic events shocking the rock”, says co-author Chen of China’s Xi’an Jiantong University. It is the only mechanism consistent with the geological setting and microscopic observations of the rock.”

The authors believe their Laue X-ray microdiffraction technique has great potential for measuring the magnitude and orientation of residual stresses in rocks, and that with this technique quartz can serve as “paleo-piezometer” for a variety of geological settings and different rock types.

“Understanding the stress fields under which different types of rock fail will help us better understand what triggers earthquakes,” says Kunz. “Our study could mark the beginning of a whole new era of quantifying the forces that shape the Earth.”

This research was supported by the DOE Office of Science.

Lawrence Berkeley National Laboratory addresses the world’s most urgent scientific challenges by advancing sustainable energy, protecting human health, creating new materials, and revealing the origin and fate of the universe. Founded in 1931, Berkeley Lab’s scientific expertise has been recognized with 13 Nobel prizes. The University of California manages Berkeley Lab for the U.S. Department of Energy’s Office of Science. For more, visit www.lbl.gov.

DOE’s Office of Science is the single largest supporter of basic research in the physical sciences in the United States, and is working to address some of the most pressing challenges of our time. For more information, please visit the Office of Science website atscience.energy.gov/.