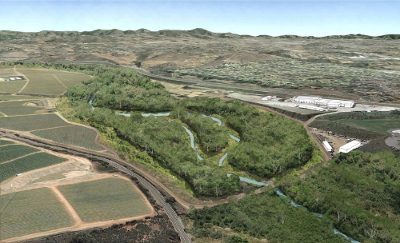 ROCKLIN, Calif., March 3, 2015—Wildlands is pleased to announce that restoration is underway at the recently approved San Luis Rey Wetland Mitigation Bank in Oceanside, San Diego County, California.  A groundbreaking ceremony was attended by local, state and federal agencies involved with the project including the City of Oceanside, California Department of Fish and Wildlife, San Diego Regional Water Quality Control Board and the U.S. Army Corps of Engineers.

The San Luis Rey Wetland Mitigation Bank is a 54-acre existing agricultural field that will be restored to native floodplain wetland habitat.  The bank is being established to offset unavoidable impacts to wetlands and riparian habitat in Northern San Diego County and Southwestern Riverside County.  Public and private development projects with permits from the Army Corps of Engineers or California Department of Fish and Wildlife can mitigate their impacts by purchasing mitigation “credits” from the bank.

“This is a milestone project for Wildlands,” said Steve Morgan, CEO for Wildlands. “The San Luis Rey bank represents a how a collaborative partnership between the resource agencies and Wildlands can result in an outstanding project.”

Joining agencies in the groundbreaking were members of the Wildlands team and the Wildlife Heritage Foundation who will hold a permanent conservation easement over the bank and manage a non-wasting endowment to ensure for long-term management and protection of the habitat once established.

“I think most important is that we have to realize this land is going to be put away for habitat in perpetuity.  It’s going to be there for ever and ever,” said Pat Shea, Executive Director of the Wildlife Heritage Foundation who participated in the ground breaking.

David Castanon, chief of the Los Angeles District’s Regulatory Division, said the groundbreaking is the result of a long effort. “I’ve been waiting 25 years for something like this,” Castanon said. “We’ve always known we’ve preferred some sort of a landscaped watershed approach to mitigation instead of the small postage stamp effort that we have on permitting historically. We’ve been pursuing this, advocating for it for a long time.”

“This in particular is very important because it’s part of the recovery plan for the southern steelhead and other endangered species issues,” said Therese Bradford, Chief of the South Coast Regulatory office, “but the hydrology and fixing the hydrology is really our focus.”

Wildlands plans to complete earthmoving and planting at the San Luis Rey bank by fall of 2015.  Wildlands currently has several other established projects in Southern California for endangered species and wetland habitat mitigation and several others in the planning stages.

“The resource agencies in Southern California are supportive of good projects.  We are excited to continue to do more,” added Morgan.

WHF is dedicated to preserving California’s rich heritage of open spaces, agricultural land, and diverse wildlife. With that dedication, the directors and staff welcome land-conservation projects of all sizes that aim to protect wildlife and their habitats. Their mission is to protect, enhance, and restore wildlife habitat on lands conserved for the benefit of future generations. Learn more at www.wildlifeheritage.org.