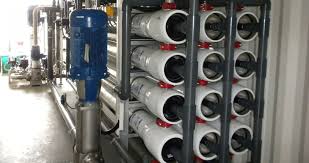 NEWTON, Mass., Feb. 26, 2015 —Desalitech, a Newton-based provider of high-efficiency water and wastewater treatment solutions, has been nominated for the 2015 Global Water Awards’ Desalination Company of the Year – one of the water industry’s most prestigious awards. In its nomination, Global Water Intelligence recognized Desalitech as a major player in the global desalination systems market.

The nomination follows the company’s recent achievement of numerous critical milestones, including a partnership with Veolia Water Solutions & Technologies to bring advanced, cost effective, high recovery water solutions to Mexico and additional countries worldwide; $11 million secured in new funding from a consortium of investors; and, most recently, recognition as a “Key Player” in MIT Technology Review’s “10 Breakthrough Technologies.”

“We are honored to be nominated as Desalination Company of the Year and recognized for our efforts and successes,” said Desalitech CEO Nadav Efraty. “Water shortage and industrial wastewater disposal are among the world’s most challenging problems, and Desalitech is proud to provide game-changing, high-efficiency solutions that guarantee more water, less waste, and reduced energy consumption.”

The Global Water Awards will be presented at the Global Water Summit on April 27th in Athens, Greece, showcasing the most important achievements in the international water industry. The event will be hosted by Jose Manuel Barroso, President of the European Commission (2004-2014) and Prime Minister of Portugal (2002-2004) at the Nasioutzik Museum in Athens.

Desalitech provides high efficiency water treatment for industrial, agricultural and wastewater reuse and concentration applications. Our next-generation ReFlex(TM) Reverse Osmosis products feature patented CCD(TM) technology – a highly efficient, reliable and flexible water treatment platform. The CCD process typically reduces waste by 50 to 75 percent and energy consumption by up to 35 percent, saving significant operating costs. Desalitech is proud to be headquartered in Newton, MA and manufactures its products in the USA.