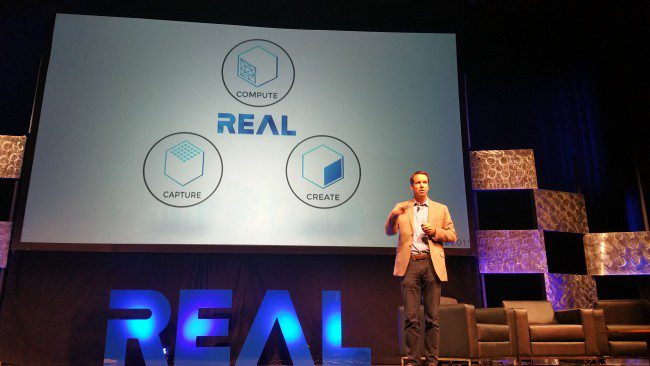 Autodesk’s REAL event kicked off today in San Francisco at the Fort Mason Conference Center, with a cross-section of reality capture technology, a wide array of applications and discussion of process change. Robert Shear, the man in charge of Autodesk’s reality capture group, introduced the event by discussing the unique moment in time where capture, cloud computing and digital fabrication are all coming together to disrupt a wide range of industries.

Within his group they are approached by a wide variety of companies and often want to connect the individuals that have come to meet them. The event provides a central place where those wanting to take advantage of this convergence can speak to one another. Over the next few days, we will talk about how these pieces come together, and what opportunities we can create. We’ll be discussing applications and implications.

Lon Addison, co-founder of the pioneering 3D scanning company Cyra and c0-chair of the event, welcomed the guests and spoke about who is here. It’s a combination of artists, engineers, manufacturers, designers, archaeologists, scientists, and more. We’re all present to understand where we’re headed next.

“We’ve gone from pain in the ass to possible,” said Shear. Describing how far we’ve come with advancements in multi-sensor engineering. He described the sensing work that he did at Scripps Institute of Oceanography to understand the mixing going on in the top 12-feet of ocean. The 8-bit digital camera they used was expensive and the process required a lot of manual processing, and a lot of time for analysis. Today, you can do the same work with cameras and an unmanned aircraft system (UAS) that can also do the processing on board for real-time insight.

Addison spoke about the half-ton optical bus for their laser which they had in a Volkswagen bus for mobile use, and then held in his hand today’s optical bus. He also did some work on virtual reality, where there was a great deal of interest, but also a lot of cost and many technological hurdles. Today, the price point is much lower, and the technologies are far more accessible.

The event will explore today’s work in these and other application areas, focused on those that are pioneering a whole new next, with technologies that are far cheaper and much more accessible.