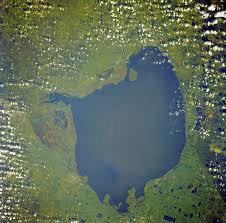 LAKE OKEECHOBEE, Fla., Feb. 24, 2015—The first section of a seepage barrier designed to prevent catastrophic failure of the 143-mile Herbert Hoover Dike around Lake Okeechobee, Florida may have unintentionally caused changes in the salinity of portions of the shallow aquifer near the lake, according to a new U.S. Geological Survey report.

The study looked at results of ongoing monitoring efforts at 10 sites spanning a distance of about 60 miles on the southeastern and southern edges of the lake. These sites are within 80 to 1550 feet of the dike. While there were some minor changes in salinity levels at all of the locations, only those along the portion of the dike where the seepage barrier had already been installed showed signs of saltwater upwelling from deeper in the aquifer. This upwelling changed the depth of the saltwater interface, where saltwater and freshwater mix in the aquifer, ultimately resulting in saltwater rising higher in monitoring wells, leaving less freshwater on top. At one location, the depth of the saltwater became shallower by 19 feet, resulting in a 60-foot deep monitoring well that had previously yielded freshwater beginning to yield salty water.

The dike was built in the 1930s to prevent floods like those in 1926 and 1928 that killed an estimated 2,400 to 3,400 people. While it has successfully served its purpose since then, researchers found that water seepage during hurricanes in 2004 and 2005 damaged the dike. Water seepage like this is responsible for about 20 percent of dam failures in the U.S., according to the Association of State Dam Safety Officials.

To address the potential dam failure, the U.S. Army Corps of Engineers began constructing a seepage barrier in 2008. The barrier protects the dike by diverting the flow of water well beneath it. The first part of the barrier is a 23-mile long, 50-to-70 feet deep, wall of grout installed in the section of the dike that was considered most vulnerable. This part of the barrier extends from Port Mayaca to Belle Glade, and was completed in the spring of 2013.

In some places, the barrier extends into a layer of saltwater in the shallow aquifer that is most likely a remnant of seawater from when the ocean covered the land. The shallow aquifer, in this area, extends from the surface to a depth of about 100 feet and is a local source of freshwater used by some residents and businesses in the area.

“We’ve been monitoring these sites for 3 years,” said Scott Prinos, a USGShydrologist and lead author of the study. “What we’re seeing is that, in locations where the seepage barrier extends to depths near or below that portion of the aquifer where freshwater and saltwater mix, the interface moved upward, and the salinity of that portion of the aquifer increased.  At one location, for example, there were no changes in salinity until one month after the seepage barrier was completed.”

Because monitoring efforts to date have only been a short distance from the dike, the researchers cannot determine how far from the lake these changes may extend.

“Our hope is that this and future research will help landowners, local and state officials as they work to address water quality and availability in this area in the future,” said Prinos.

The report, “Changes in the Saltwater Interface Corresponding to the Installation of a Seepage Barrier Near Lake Okeechobee, Florida,” by Scott T. Prinos and Robert Valderrama is available online.