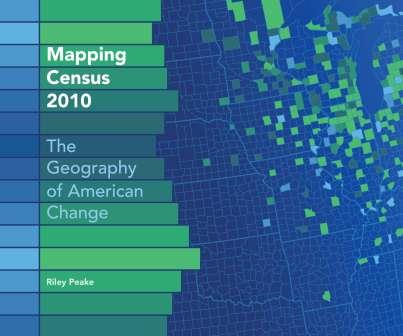 Mapping Census 2010: The Geography of American Change from Esri Press depicts the extraordinary changes in the American population over the past decade. Extracted from the data collected by the US Census Bureau in 2010, the new maps are displayed side by side with maps created after the 2000 census.

Using choropleth maps that are shaded in proportion to the change in statistical variable, the atlas is divided into four sections and compares variances in population shifts, household occupants, housing ownership, and ethnic diversity between 2000 and 2010.

Section 1 includes snapshots of the total US population in 2000 and 2010 without reference to race or ethnicity. Section 2 is a series of maps showing the state of housing and households in America over that decade. Section 3 maps minority populations and diversity using data from Census 2000 and Census 2010. Section 4 presents different views of the basic race and ethnicity data collected by the US Census.

“The 10 years since the previous census was a decade fraught with unease in global security, natural disasters, and economic turmoil,” says Jack Dangermond, Esri president. “How has America changed demographically and geographically in these difficult times? Mapping Census 2010: The Geography of American Change sheds light on this and other questions about our population.”

About Esri Press
Esri Press publishes books on GIS, cartography, and the application of spatial analysis to many areas of public and private endeavor including land-use planning, health care, education, business, government, and science. The complete selection of GIS titles from Esri Press can be found on the web at esri.com/esripress.