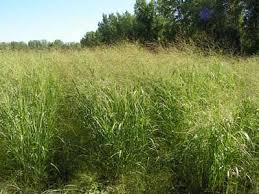 Feb. 20, 2015—University of Iowa researchers have found a type of grass that was once a staple of the American prairie can remove soil laden with PCBs, toxic chemicals once used for cooling and other industrial purposes.

The researchers report that switchgrass successfully removed up to 40 percent of the PCBs from contaminated soils in lab experiments. When boosted by a PCB-oxidizing microorganism, the removal rate reached 47 percent.

The finding may lead to a natural, environmentally friendly approach to reducing PCBs (polychlorinated biphenyls), which were banned for use by the U.S. Congress in 1979 but still permeate U.S. soils, waterways, and living organisms. In some communities bordering Lake Michigan, for example, residents are advised to limit their consumption of locally caught fish, due to industrial release of thousands of tons of PCBs during the 1950s and 1960s.

The researchers investigated how adding an aerobic PCB-oxidizing microorganism could enhance the oxidation of certain PCB congeners (PCB 52, PCB 77, and PCB 153). “It seems to have worked for at least one of the congeners studied,” says Tim Mattes, associate professor of civil and environmental engineering and corresponding author on the paper, published in the journal Ecological Engineering.

“One surprising finding was that the presence of the switchgrass seemed to promote the survival and the activity of the added (aerobic PCB-oxidizing microorganism) LB400 bacteria,” Mattes adds.

For the current study, researchers spiked soil with a mixture of PCBs at concentrations commonly found in soils and sediments—and which pose a potential risk to human and environmental health. The contaminated soil was aged for two months at 25 degrees Celsius (77 degrees Fahrenheit) in sealed tubs to allow PCBs to fully leach into the soil and thereby better represent real-life conditions.

Researchers found that after 24 weeks, about 40 percent of total PCB mass had been removed by the switchgrass-treated soil, significantly higher than the 30 percent removed from untreated soil. Soil applied with a PCB-oxidizing microorganism (Burkholderia strain LB400) was found to remove about 47 percent of one of the PCBs tested. Also, the presence of switchgrass appeared to facilitate the microorganism’s survival in the soil.

“Normally, we think that if we can get plants to grow in degraded lands (so-called brownfields) that the proper ‘bugs’ will grow in the root zone to degrade the contaminants,” says Jerry Schnoor, co-author and UI civil and environmental engineering professor. “What’s new in this story is that we can actually help the process along by adding the proper bugs (LB400) to the root zone at the time of planting and beyond.”

“The possibility of synergistic interactions between the switchgrass and the bioaugmented PCB-degrading bacteria suggests that employing both plants and bacteria in PCB remediation strategies holds promise for enhanced removal of these recalcitrant compounds from contaminated sites,” Mattes says.

He notes that he currently is studying which microbes work in the root zone of the plant to transform PCBs by a process called reductive dechlorination.

In addition to Mattes and Schnoor, coauthors of the paper are Yi Liang, Richard Meggo, and Dingfei Hu, all in the UI College of Engineering.

The paper is titled, “Enhanced polychlorinated biphenyl removal in a switchgrass rhizosphere by bioaugmentation with Burkholderia xenovorans LB400.”

The research was funded by the National Institute of Environmental Health Sciences Superfund Research Program (grant No. P42ES13661) and by a fellowship for Yi Liang from the Comment Center for Biocatalysis and Bioprocessing at the University of Iowa.