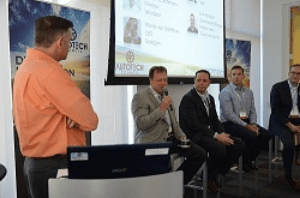 MORGAN HILL, Calif., Feb. 19, 2015—Prices at the pump may be dropping, but cars don’t live by cheap gas alone.  It’s becoming abundantly clear that today’s vehicles – and especially tomorrow’s — will run on data.

With anywhere from 60-100 different sensors on board the average new car – and estimates of twice that many within the next five years – the global auto industry is on track to integrate some 22 billion sensors annually by 2020.  More sensors mean smarter and more sophisticated vehicles. While that may yield new opportunity, improved safety and happier drivers, it may also generate mountains of under-utilized data and potential threats to privacy.

Against that backdrop, industry leaders congregated during a recent Autotech Council meeting at Nokia Growth Partners in Sunnyvale to weigh in on the future of sensors.  What applications will next-generation sensors and electronics enable?  What technologies will enable these new applications?  And what will become of all the data?  Tackling those questions, among others, were Wolfgang Juchmann, Director of Sales & Marketing, Velodyne LiDAR (www.velodynelidar.com); Jeffrey Hannah, Director of North America at SBD, an independent consultancy specializing in driver assistance systems; Moritz von Grotthuss, CEO at Gestigon, a global leader in gesture control and interface design; and Eric Adolfsson, automotive strategist at Texas Instruments.

Visionary companies in the auto industry meet monthly at the Autotech Council (www.autotechcouncil.com) to discover startups, educate themselves on new innovation, build partnerships, exchange insights, and grow their professional networks.  The result is earlier discovery of new products and services, better understanding of technology’s potential impact and timing, access to more entrepreneurs and investors, and in the big picture — getting better cars to market faster.

Juchmann, who promised a smaller, more cost-competitive LiDAR sensor when he presented to the Council a year ago, kept that promise, brandishing Velodyne’s new LiDAR Puck, designated the VLP-16, from his shirt pocket.  With 16 channels of laser/detector pairs, the VLP-16 achieves 360° full surround view and 30° vertical field of view – all at a market-leading price point of $7,999.  Although Velodyne developed the Puck primarily for mapping from unassisted aerial vehicles (UAVs) and other mobile platforms, Juchmann reported “tremendous interest from automotive industry OEMs and Tier 1 suppliers.” Shipping of the VLP-16 began earlier this year, with the order backlog currently exceeding production capacity – a situation, Juchmann said, that will change by mid-year.

“We have already experienced a tenfold drop in price, from about $80,000 for the initial model HDL-64E — famously displayed on Google’s self-driving car — to $8,000 today,” he said.  “We believe the price can be further reduced by at least another factor of 10, in parallel with an expected increase in market volume to millions of units per year.  Velodyne is on record saying that we will not be a bottleneck for the commercialization of self-driving cars.  Our 3D LiDAR sensors will be ready technologically and from a pricing point of view, once the auto industry has scaled for volume manufacturing of autonomous vehicles.”

In addition to Juchmann’s update on Velodyne’s work with 3D LiDAR sensors, SBD’s Hannah provided an overview of sensors and the development of advanced driver assistance systems (ADAS) in the auto industry.  Gestigon’s von Grotthuss described the company’s time of flight (TOF) sensor and software, for gesture recognition within the car itself.  Adolfsson, of Texas Instruments, showcased TI processors and sensors that integrate data for and from ADAS.  TI’s Silicon Valley lab has deployed a test vehicle that uses Velodyne’s HDL-32Es and fuses the sensors with camera data to RGB color 3D LIDAR data.

Founded in 1983 and based in California’s Silicon Valley, Velodyne Acoustics, Inc. is a diversified technology company known worldwide for its high-performance audio equipment and real-time LiDAR sensors.  The company’s LiDAR division evolved after founder and inventor David Hall competed in the 2004-05 DARPA Grand Challenge using stereovision technology.  Based on his experience during this challenge, Hall recognized the limitations of stereovision and developed the HDL64 high-resolution LiDAR sensor.  Velodyne subsequently released its compact, lightweight HDL‑32E sensor, available for many applications including UAVs, and the new VLP-16 LiDAR Puck, a 16-channel real-time LiDAR sensor that is both substantially smaller and dramatically less expensive than previous generation sensors.  Since 2007, Velodyne’sLiDAR division has emerged as a leading developer, manufacturer and supplier of real-time LiDAR sensor technology used in a variety of commercial applications including autonomous vehicles, vehicle safety systems, 3D mobile mapping, 3D aerial mapping and security.  For more information, visit www.velodynelidar.com.