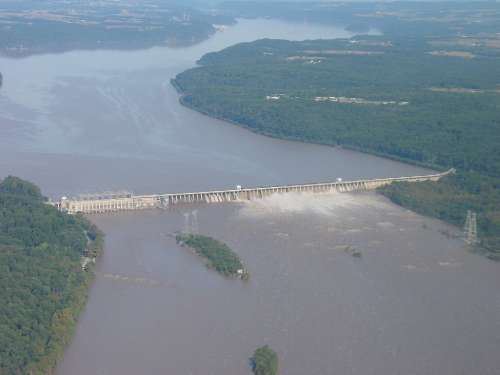 The Conowingo Dam on the Susquehanna River is at about 92 percent capacity for sediment storage according to new U.S. Geological Survey research.

Since the dam’s construction in 1929, sediment and nutrients have been building up behind it, being released periodically downriver and into the Chesapeake Bay, especially during high flow events.

“Storage capacity in Conowingo Reservoir continues to decrease, and ultimately that means more nutrients and sediment will flow into the Bay,” says Mike Langland, a USGS scientist and author of the study. “Understanding the sediments and nutrients flowing into the Bay from the Susquehanna River is critical to monitoring and managing the health of the Bay.”

Previous research has shown that having excess nutrients in the Bay depletes the water of oxygen needed to maintain healthy populations of fish, crabs, and oysters.  Additionally, the nutrients, along with sediment, cloud the water, disturbing the habitat of underwater plants crucial for aquatic life and waterfowl.

At full sediment-storage capacity, the Conowingo Reservoir will be about one-half filled with sediment, with the remainder–about 49 billion gallons–flowing water.  That amount of sediment could fill approximately 265,000 rail cars, which if lined up would stretch more than 4,000 miles.

The Susquehanna River is the largest tributary to Chesapeake Bay and transports about half of the total freshwater input to the Bay, along with substantial amounts of sediment, nitrogen and phosphorus.

Measuring the capacity of the dam to hold sediments and nutrients contributes to an improved understanding of factors that influence the health of the Chesapeake Bay.

Three hydroelectric dams and their associated reservoirs on the lower Susquehanna River have been impacting sediment and nutrient transport since construction in the early 1900’s. Previous USGS studies have shown the two upstream reservoirs have reached their sediment storage capacity and the most downstream dam and reservoir, the Conowingo, was also losing its ability to trap nutrients and sediment from reaching the Chesapeake Bay. A 2012 USGS report revealed that, even though the Conowingo reservoir had not yet reached its maximum storage capacity, it had begun to lose its phosphorus and sediment-trapping ability, with increasing amounts going into the Bay.

Due to the concerns about increasing nutrient and sediments loads flowing into the Bay, the U.S. Army Corps of Engineers, working with several partners, will soon be releasing ,the Lower Susquehanna River Watershed Assessment. The study suggests several sediment-management options for the reservoirs on the Lower Susquehanna River and indicated additional monitoring and research are needed to support management decisions.

The long-term analysis (1900-2012) conducted for this new USGS study reported here revealed how past practices affected sediment transport in the Susquehanna River Basin.

The USGS study, in addition to providing the current estimate of sediment capacity also provides a longer-term (100 years) analysis of sediment flowing into the reservoirs.

Sediment loads transported over the past 100 years in the Susquehanna River into the reservoirs have decreased from 8.7 million tons per year in the early part of the 20th century to the current level of about 3.5 million tons. The declines of sediment into the reservoirs since the 1950s are most likely related to introduction of soil conservation practices, land reverting back to forest, and better management of stockpiled coal piles.

Since construction of Conowingo Dam was completed in 1929, an average 70 percent of the transported sediment reaching the upper Chesapeake Bay is from the Susquehanna watershed. The additional 30 percent of the sediment is being scoured, or removed from sediment deposited in the reservoirs.

Information from this report and new partner studies will be used by the U.S. Environmental Protection Agency Chesapeake Bay Program and the state partners in considering options to reduce nutrient and sediment loads to help meet the requirements of the Chesapeake Bay Total Maximum Daily Load.

Additional information on USGS Susquehanna results and Chesapeake Studies can be found online.