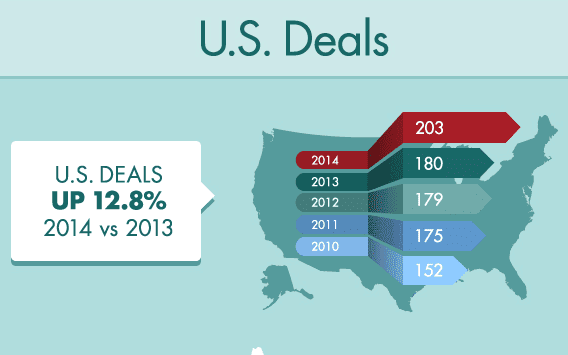 After two years of relative stagnation, the M&A marketplace in the United States regained momentum in 2014 thanks to greater industry confidence on the part of buyers and investors. In 2014, Morrissey Goodale tracked a record 203 sales of U.S.-based A/E firms, representing a 12.8% increase over the 180 domestic deals recorded in 2013. Although sales of international firms still lagged behind historic levels, they ticked up slightly from 111 deals in 2013 to 114 deals last year. Overall, global dealmaking in the A/E industry increased 8.9% in 2014.

Other findings from Morrissey Goodale’s 2014 AEC M&A Year in Review include:

Morrissey Goodale Principal Consultant Neil Churman expects M&A activity will continue to grow in the coming year. “Mergers and acquisitions will have a record year in 2015 and will increase some 25% over 2014,” he says. “The industry is at a tipping point from a consolidation perspective. High-performing firms in hot markets and geographies will command record valuations.” Morrissey Goodale’s complete 2014 AEC M&A Year in Review and an interactive map of M&A activity in the United States can be found at

Morrissey Goodale LLC is a leading management consulting and research firm serving the architecture, engineering, and construction (AEC) industry. Headquarters are located at Riverside Center, 275 Grove Street, Suite 2-400, Newton MA, 02466. The company can be reached at 508-650-0040 or on the web at www.morrisseygoodale.com.