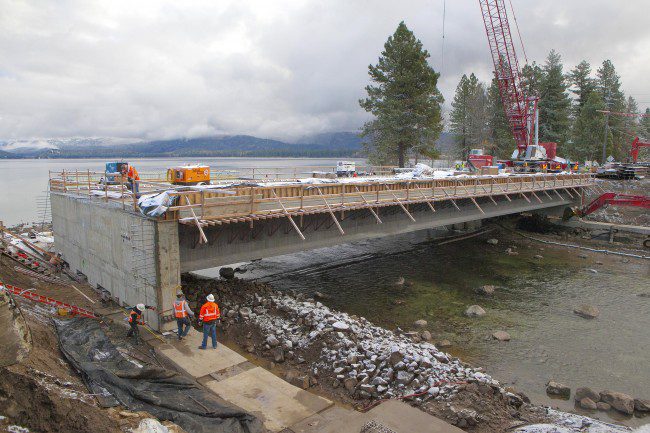 BOISE, Feb. 12, 2015— The project to replace the 83-year-old Lardo Bridge in McCall, open to traffic since November 2014, won a recent “Excellence in Concrete” award from the Intermountain Chapter of the American Concrete Institute.

The bridge is located at the outlet to Payette Lake on the southwest shore. Ralph L. Wadsworth and Lochner used ITD’s conceptual design to complete the bridge design and build the new bridge. The construction/design contract was $3.64 million.

Crews demolished the old Lardo Bridge early last fall. The new bridge was constructed north of the existing structure. Six 157-foot girders for the new bridge, weighing 197,000 lbs. apiece, were set on the temporary structure in mid-September 2014. The new bridge was then slid into place in late October using a “lateral slide” accelerated construction method, the first to occur in Idaho by ITD. Using this method reduced a full closure of the bridge by months.

“The innovative construction method of sliding the new bridge into place resulted in significantly reduced disruption of traffic,” ITD Resident Engineer Bryon Breen said. “Being able to build the new bridge adjacent to the old bridge while the old bridge was still in operation lessened the impact to the travelling public for the majority of the project time.”

“Utilizing the Design/Build process allowed the project to go from concept to construction completion within one year, “ Breen explained.

The Lardo Bridge project was ITD’s second design-build project. The first, an intersection reconstruction in Boise on Idaho 44 from State Street to Ballantyne Lane, completed in October 2013, was recognized with three awards.