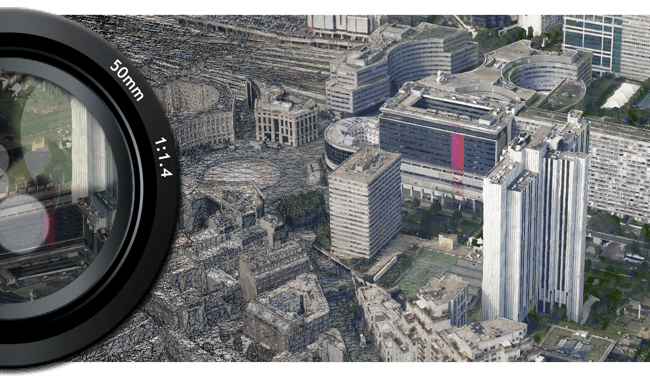 ORLANDO, Fla., Feb. 10, 2015—Bentley Systems, Incorporated, the leading company dedicated to providing comprehensive software solutions for sustaining infrastructure, today announced that it has acquired France-based Acute3D, provider of Smart3DCapture software for reality modeling. Through reality modeling, observations of existing conditions are processed into representations for contextual alignment within design modeling and construction modeling environments. Rapid technology advancements in scanning and photography – and especially the burgeoning application of unmanned aerial vehicles (UAVs) for these purposes – are making the capture of such observations broadly and continuously affordable in sustaining infrastructure.

Acute3D software automates the generation of high-resolution, fully-3D representations from digital photographs taken with any camera, whether highly specialized or embedded in a smartphone. Scalable from site to city, and with precision limited only by the quantity and quality of photography, Acute3D technology can assure that existing conditions are contemporaneously considered throughout the architecture, engineering, construction, and operations of any infrastructure asset. Now that photo sequences from UAVs are likely to become the most feasible source for surveying, construction monitoring, and inspection workflows, Acute3D’s industrial-level accuracy and unlimited scalability are making it a preferred technology for UAV manufacturers and professionals around the world.

Bentley Systems Founder and CTO Keith Bentley said, “The world-class Acute3D developers have already achieved two breakthroughs, which remove the barriers to the adoption of reality modeling. First, Acute3D has made it possible for anyone to sufficiently capture existing conditions with just a camera. Of equal importance is the value of the Acute3D result. Rather than a voluminous cloud of discrete points, Acute3D produces a 3D ‘reality mesh’ – intrinsically in the same geometric idiom as engineering models, readily aligning the real-world context.

“Just as Acute3D’s innovations have now brought reality modeling within reach of every infrastructure professional, we and our new colleagues are excited to be working together to incorporate Acute3D functionality throughout our platform and application portfolio, enhancing information mobility throughout infrastructure asset lifecycles.”

Acute3D was co-founded in 2011 by Dr. Jean-Philippe Pons and Dr. Renaud Keriven, who have attracted and led an accomplished team of researchers and developers, headquartered in Sophia Antipolis (the French “Silicon Valley”). Since its founding, Acute3D has attracted a rapidly expanding user base that includes Nokia, PASCO, and Saint-Gobain, and OEM licensees that include Airbus Group and Autodesk. In China, Internet giant Tencent is working with Acute3D to do large-scale 3D city modeling for several mega-cities, from both aerial and street view photography. Other applications of Acute3D have included existing conditions capture for construction sites, manufacturing facilities, mining operations, pipelines, and oil and gas exploration.

Dr. Jean-Philippe Pons said, “When Renaud and I founded Acute3D, our vision was to make widely available, at industrial precision, what we now describe as reality modeling. With our team, we are very pleased to be joining Bentley to complete our reach. Together, we have already shared and embarked upon many new initiatives to incorporate reality modeling within design and construction modeling. Voila!”

SPAR Point Group Editor Sean Higgins noted, “At SPAR Point Group, we have been consistently impressed with the rapid advances of Acute3D’s technology. We have recently reported on their ability to generate a ‘very high-resolution 3D model’ of the city of Stockholm, which was then merged with GIS data to become a key tool for the city’s decision-making and communication with its citizens. With Bentley’s acquisition of Acute3D, we can look forward to seeing more innovative uses of what they call ‘reality modeling’ in infrastructure projects as well as a convergence of technology that will yield tremendous benefits for consulting engineers, constructors, and the owners of infrastructure assets.” (For more on the SPAR Point Group news report, visit http://www.sparpointgroup.com/news/seeing-stockholms-future-in-3d.)

Founded in 1984, Bentley has more than 3,000 colleagues in over 50 countries, more than $600 million in annual revenues, and since 2006 has invested more than $1 billion in research, development, and acquisitions.

Additional information about Bentley is available at www.bentley.com and in Bentley’s annual report. For Bentley news as it happens, subscribe to an RSS feed of Bentley press releases and news alerts. Visit The Year in Infrastructure Conference for highlights of Bentley’s premier thought-leadership event. To view a searchable collection of innovative infrastructure projects from the annual Be Inspired Awards, access Bentley’s Infrastructure Yearbooks. To access a professional networking site that enables members of the infrastructure community to connect, communicate, and learn from each other, visit Bentley Communities.