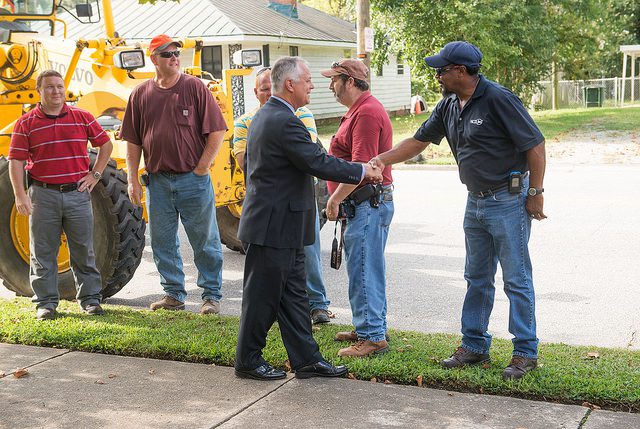 Raleigh, Feb. 5, 2015—As Governor Pat McCrory said in his State of the State Address on Wednesday, continued transportation infrastructure investment is critical to North Carolina’s future, and it plays an integral role in job creation, economic development and overall quality of life.

“Over the past year, we have executed a real team effort to transform transportation investment in North Carolina,” Gov. McCrory said. “The great news is our work is already paying dividends in terms of increased opportunity for our state, which is our ultimate aim in everything we do.”

Leading that team effort has been Secretary Tony Tata, whose manifold engagements over the past two years include over 600 listening sessions, speeches, board meetings, legislator discussions and town hall meetings. This past year alone he conducted over 130 town hall style speaking events around the state and nation, engaging transportation officials, national and local government leaders, and citizens.

He has visited all 14 transportation divisions throughout the state at least twice, usually more, conducting employee listening sessions, local leader engagements, and project assessments. Visiting over 80 counties in two years, Secretary Tata ensures local and statewide interests are integrated into all facets of NCDOT. He also serves with the Board of Transportation, the Ports Authority Board, and as Chairman of the Turnpike Authority Board and the Global TransPark Board, working to synchronize the state’s transportation efforts.

One of the foremost areas of focus over the past year has been the implementation of the Strategic Transportation Investments law passed in summer 2013. The law establishes the Strategic Mobility Formula, which uses a data-driven approach to more efficiently fund transportation improvements on the statewide, regional and division levels, with the goal of meeting the state’s top priorities while providing flexibility to address individualized local needs.

NCDOT officials initially estimated the new formula would double the number of projects that could be funded over a 10-year period, but when the department’s Draft State Transportation Improvement Program—the document that schedules transportation projects for the next 10 years—was released in December it contained nearly three times as many projects, funding 478 highway projects that  are estimated to generate  300,000 jobs, up from 175 highway projects supporting an estimated 174,000 jobs over the same timeframe. Another indication that the process is working as intended: the nearly 1,100 projects across all modes of transportation contained within the Draft STIP include improvements in each of the state’s 100 counties.

“Our intent with this new formula is to be as efficient as possible with every taxpayer dollar,” Transportation Secretary Tony Tata said. “We have also implemented this new process with transparency and fidelity. Now, we make transportation investments based on hard data and the input of our local communities, not politics.”

About 3,100 projects representing $70 billion in needs were submitted for prioritization under our Strategic Transportation Investments law, with only about $15 billion available to pay for them. This means that, while the Strategic Mobility Formula is allowing the department to program more projects than the previous formula, it is still only funding 18 percent of the identified needs.

Along with implementation of the Strategic Transportation Investments law, the Governor’s 25-Year Vision for transportation in North Carolina, which was released in September, plays a key role in ensuring that North Carolina continues to leverage its infrastructure and make strategic transportation decisions over the long-term.

“Our transportation system serves as the backbone of our state and plays a critical role in our future,” Gov. McCrory said. “From long-range efforts to attract and retain business and industry and support our military, to strengthening connections to job, education, health care and recreation centers, transportation shapes who we are as a state. We must have a vision for what we want North Carolina to be and a roadmap for how we need to invest in our infrastructure to achieve our full potential over the next quarter century.”

The vision provides solutions to address high-level challenges in each of North Carolina’s four major regions—coastal, eastern, central and western—as well as the state as a whole. It focuses on strengthening connections that are critical to North Carolina and works in tandem with the Strategic Transportation Investments law to meet the long-term needs of the state.

NCDOT is moving forward with a number of projects in each region that exemplify this emphasis on improving connections, including:

·         Coastal—connecting Hampton Roads to the Outer Banks by constructing the Mid-Currituck Bridge and connecting Camp Lejeune/Jacksonville to the Port by expanding U.S. 17 between Jacksonville and Wilmington

·         Eastern—connecting Fort Bragg to the Strategic I-95 Corridor by completing the Fayetteville Outer Loop and connecting eastern North Carolina to Hampton Roads by upgrading U.S. 17 to interstate standards

·         Central—Expanding I-40 into Wake County from Johnston County, constructing the Winston-Salem Northern Beltway/I-74 Corridor, completing the Greensboro Urban Loop and expanding I-85 in Gaston and Rowan counties

“North Carolina is one of the fastest growing states in the nation, and we have to make investments in our infrastructure to support this growth,” Tata said.

The vision provides alternative funding and financing solutions, such as the use of public-private partnerships and taking advantage of historically low interest rates through bond strategies, that play an important role in meeting the state’s growing needs with limited resources.

Under this contract, NCDOT will be investing about $88 million in the project, with a private partner securing the remainder of the $655 million to design, build, operate and maintain the lanes in exchange for the toll revenue generated by the lanes. NCDOT’s contribution is a fraction of what it would have cost to deliver the project using traditional funding, and the public-private partnership will also expedite project completion to within four years instead of the estimated 20 years it would take to secure enough conventional funding to move forward.

In September the N.C. Board of Transportation approved a policy that allows for private sponsorship of several of NCDOT’s operational programs and services as a way to generate additional revenue for transportation improvements.

Additionally, in November the board approved a draft study that was completed at the direction of the General Assembly and examined how fees, sponsorship and privatization might reduce the use of public funds for services provided by NCDOT.

Recommendations include new sponsorship opportunities for programs and activities such as highway litter removal, rest areas, and the department’s Incident Management Assistance Patrols, as well as implementing or increasing fees for some current NCDOT services. In many cases, NCDOT does not collect enough in fees to cover the cost of delivering those services.

“As a board, we recognize that we’ve got to look outside the status quo and be willing to make changes that support the best interest of North Carolina,” Board Chair Ned Curran said. “We want to make wise decisions today that will help us keep moving in the right direction tomorrow.”

In another effort to better serve North Carolina, NCDOT also continued its focus on reforming its Division of Motor Vehicles to improve customer service, efficiency and technology. In May, Gov. McCrory joined Secretary Tata and NCDMV Commissioner Kelly Thomas to formally open a flagship state-of-the art NCDMV office in Huntersville, which showcases many of the improvements that have been implemented through the department’s efforts.

Major initiatives DMV is pursuing include:

Extended Hours – NCDMV has expanded its standard hours in 19 driver license offices, as well as three state-owned Vehicle Services locations through a pilot program. This enables offices to stay open later during the week and/or on Saturdays. Last year, the Division served close to 70,000 customers during Saturday hours alone, with more than 85 percent of the population residing within a 30-mile radius of a DMV-extended hours branch.

Reduce Wait Times Pilot – Eight pilot locations participated in the program, which tested various time saving measures and customer service amenities. This program and additional improvements are being expanded to more than 25 locations this year.

Customer Service Training – NCDMV partnered with Wake Technical Community College to provide a customer service training session to all customer-facing employees, including the contractors and staff of 122 license plate agencies statewide. More than 1,800 employees have completed this training.

Veterans Identifier – NCDMV placed a special “Veteran” designation on the driver license or ID cards of qualifying North Carolina veterans. This customer service benefit assists veterans in obtaining military discounts from a wide variety of retailers and service providers without having to show their DD-214 form (specific discharge form). In 2014, the Division issued more than 27,000 licenses with designations statewide.

Online Driver License / Identification Card Renewal – The Division is currently developing online applications to renew driver license and ID cards, which will streamline the process and save the user a trip to the driver license office.

Self-Serve Kiosks – NCDMV will be installing free-standing ATM styled self-serve kiosks in 2015. Kiosks will be featured in driver license offices and other popular locations, offering customers the opportunity to renew and/or replace their driver license or ID card and aiding in the reduction of wait times at office locations.

“Over the past year, we have continued to introduce new measures aimed at improving the overall customer experience at DMV,” Commissioner Kelly Thomas said. “We are continually striving to identify new ways to utilize innovation and technology to increase efficiency and provide a higher level of service to North Carolina.”

In the year ahead, NCDOT plans to build on the work that has already been done in these major areas of focus to further address the demands on North Carolina’s transportation infrastructure.

Most notably, this includes identifying and pursuing additional revenue for transportation improvements, centered on working with the General Assembly on a funding reform package in 2015.

“We’ve worked hard over the past year to lay a solid foundation for increased transportation investment,” Tata said. “We’ve got a data-driven decision-making process in place, we have a realistic plan for the future, and the time has to come to determine how we are going to work together to make our vision a reality and ensure North Carolina’s continued prosperity.”

2015 also marks a tremendous milestone for NCDOT as it celebrates its 100th anniversary.

“When you look back over the past 100 years, it’s amazing to see how transportation has transformed life in our state and helped North Carolina become what it is today,” Gov. McCrory said. “It’s exciting to be on the leading edge of another century of achievement and to be playing a role in writing the next chapter of North Carolina’s story.”

More information regarding NCDOT’s recent performance and achievements is included in the department’s 2014 Annual Performance Report.