/ Analysis / Improving the Water and Marine Life in Tampa Bay

Improving the Water and Marine Life in Tampa Bay 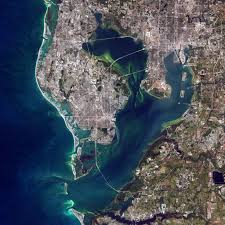 GAINESVILLE, Fla., Feb. 5, 2015—University of Florida researchers will work with other scientists to study how to make the water and marine life in Tampa Bay healthier, which in turn could help protect Florida’s offshore ecosystems and fishing economy.

Scientists with UF/IFAS are the first researchers at the Center for Conservation, part of an alliance comprised of UF/IFAS, Tampa’s Florida Aquarium, Tampa Electric Co. and the Florida Fish and Wildlife Conservation Commission.

The partnership came about after Tampa Electric, a subsidiary of TECO Energy, offered the Florida Aquarium 20 acres in Apollo Beach for off-site quarantine and animal holding in 2012-13, said Craig Watson, director of the UF/IFAS Tropical Aquaculture Laboratory in Ruskin. Watson suggested the partners bring FWC aboard because the agency was looking for marine enhancement centers, Watson said.

Then TECO, the Florida Aquarium, UF/IFAS and FWC formed an alliance to create the Center for Conservation on the Apollo Beach site, he said. The site is also near TECO’s Manatee Viewing Center. The CFC will try to solve aquatic resource problems, Watson said.

“One major goal is to attract universities and other research entities to the site in an ‘open campus’ situation,” Watson said. 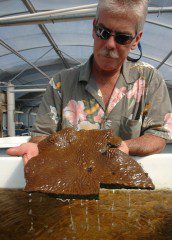 Craig Watson, director of the UF/IFAS Tropical Aquaculture Laboratory in Ruskin, holds a coral fragment grown in an outdoor greenhouse at the facility. UF/IFAS is the first research entity to have scientists at the new Center for Conservation in Apollo Beach, Watson said. UF/IFAS scientists will study marine ecosystems and sea turtles to help protect Tampa Bay and to boost its fishing economy.

Enter UF/IFAS. Two new researchers are in on the ground floor of UF/IFAS’ participation: Josh Patterson, an assistant professor of restoration aquaculture and Mark Flint, a research assistant scientist in coastal and marine sciences, are now at the Apollo Beach site working closely with the state government, not-for-profit and commercial partners.

Aquaculture is the process of growing, harvesting, shipping and marketing aquatic animals and plants. Through his research, Patterson tries to figure out how to grow corals and other species and use them to restore natural areas.

As a veterinary epidemiologist, Flint said he’s helping identify health issues in Tampa Bay. In particular, he studies sea turtles because they provide a great baseline for health in that body of water.

While there’s no single sentinel indicator of environmental health, Flint said he’s creating a surveillance program for Tampa Bay and Florida’s waters that includes multiple species, each giving an insight into the health of an area depending on how they use their homes.

“Sea turtles live for about 100 years,” Flint said. “They live in the same area for basically their whole lives, use the same foraging areas, nest on the same beaches, mate in the same areas. This makes them a great study for seeing what is going on in Tampa Bay.”