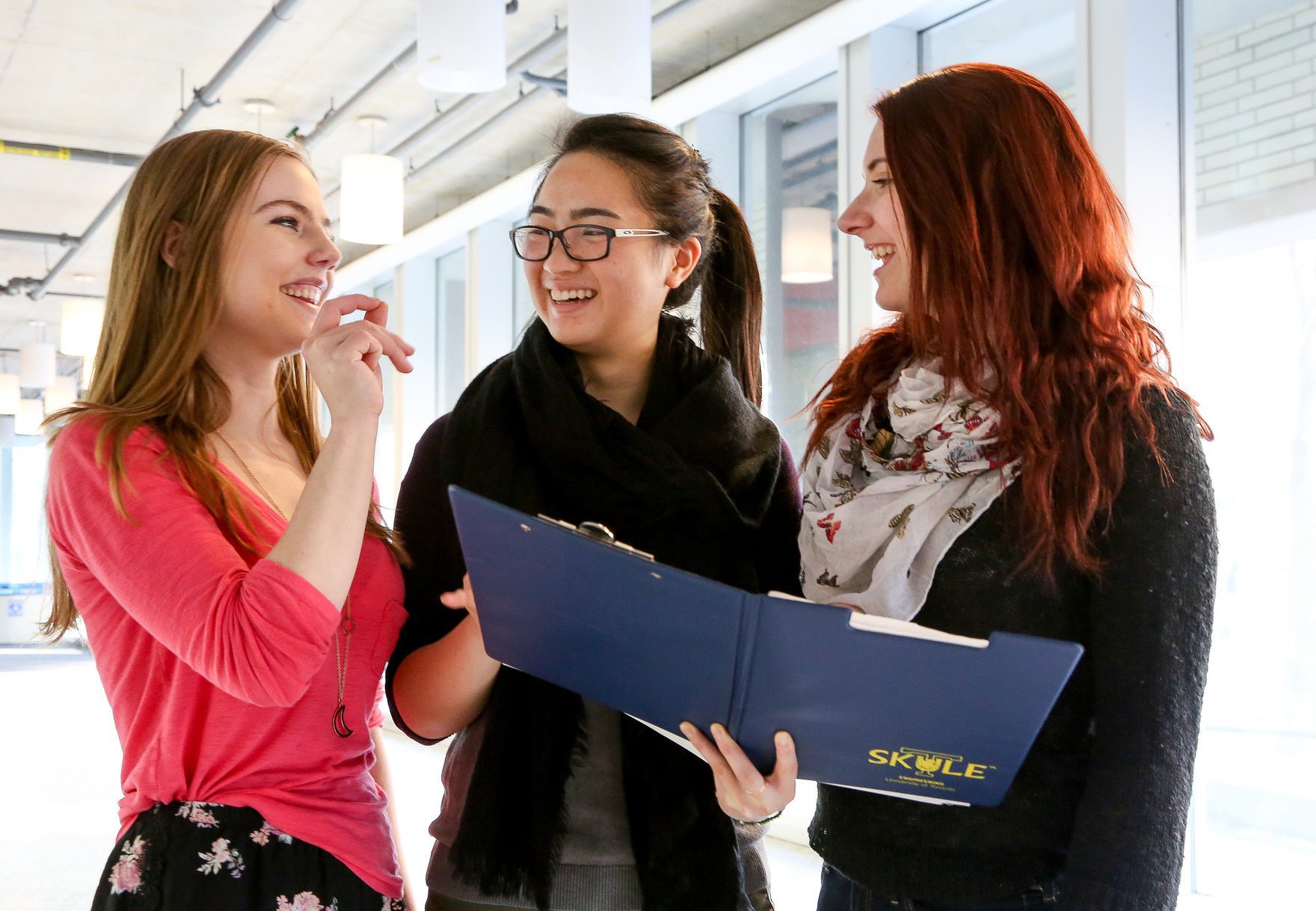 Women now account for 30.6 per cent of first-year students in U of T Engineering programs: a record for the Faculty and a number that surpasses all other Ontario universities. It is the only engineering school in Ontario with female first-year enrolment of more than 30 per cent. National figures are expected later this year from Engineers Canada.

“U of T Engineering is a rich environment for talented, bright women to become engineering leaders,” says Dean Cristina Amon. “Diverse perspectives are the foundation of our culture of excellence in research, education, service and innovation. This achievement is encouraging as we continue our proactive efforts to foster diversity within the Faculty, among universities and across the engineering profession.”

Today, one quarter (25.8 per cent) of U of T Engineering’s undergraduate population is female, compared to a province-wide average of 19.7 per cent. Across Canada and the United States last year, those averages were 18.9 per cent and 19.9 per cent respectively. The Faculty’s targeted recruitment efforts have been successful, with female undergraduate enrolment up from 21.3 per cent just six years ago, alongside rising entrance grade averages for first-year students that reached a record 92.4 per cent this year.

“It’s exhilarating to be part of such a diverse and talented student community,” says Teresa Nguyen, a fourth-year civil engineering student and president of the Faculty’s Engineering Society (which elected its first female president in 1975). “At U of T Engineering, it doesn’t matter what your background is—it’s about the ideas, expertise and reasoning you bring to the table.”

As a leader in engineering education and research, U of T Engineering continues to attract world-class faculty. The complement of female faculty members has more than doubled in the past eight years, from 21 in 2006 to 44 in 2014. Seventeen per cent of faculty members are women, which is three points higher than the Ontario average (14 per cent) and four points higher than the Canadian average (13 per cent). These numbers are expected to grow in the years ahead, as early-career faculty members move up in the academic ranks. More than a quarter (27.8 per cent) of U of T Engineering’s associate professors (early-career, tenure-stream faculty members) are now women, compared to an Ontario average of 15 per cent and a national average of 15.7 per cent.

“Engineering has changed significantly from when I began at U of T several decades ago,” says Professor Susan McCahan, vice-provost, innovations in undergraduate education, who was the University’s first female faculty member in mechanical engineering. “It is increasingly recognized as a vibrant and innovative profession: one that encourages broad perspectives and collaboration to drive positive changes that improve our world.”

“Amidst the increasing numbers of women entering Engineering programs, there is more work to be done in attracting women to the diverse and rewarding field of engineering,” says Dean Cristina Amon. “We have re-imagined engineering education by introducing program innovations, new resources for students and outreach activities to continue to attract an even more diverse range of applicants, including women.”

As of 2013, women accounted for just 11.7 per cent of all professional engineers in Canada. Growing numbers of female engineering students signal a promising future for gender balance in the profession.

U of T Engineering offers many outreach programs that aim to inspire girls and young women. In 2015, more than 560 female participants and 20 female instructors will take part in the following programs:

U of T Girl Guide Badge Day
For Girl Guides in the Greater Toronto Area, ages 9-11
Leaders from across the GTA bring their Girl Guide units to campus for the day in the hopes of earning an Engineering or Physics badge. Female undergraduate engineering students lead the hands-on activities. The 2015 Badge Day will take place on May 6.

Go ENG Girl
For Ontario girls in grades 7-10 and their parents
This popular annual event provides an opportunity for girls and their parents to learn about the wonderful world of engineering from female professionals, academics and students. Participants engage in fun, hands-on projects, and get to speak with people currently working in the field of engineering. U of T holds this event in collaboration with the Ontario Network of Women in Engineering (ONWIE). Go ENG Girl takes place annually in October. Read more about the 2014 Go ENG Girl event.

Go CODE Girl – NEW!
For Ontario girls in grades 9-11
Offered in collaboration with ONWIE, Go CODE Girl will provide an exciting opportunity for girls to learn about the world of coding and software development, and career opportunities in the fields of computing and engineering. The inaugural event will take place on February 21. Read more about Go CODE Girl

Young Women in Engineering Symposium
For top grade 12 female science students
On October 4, 2014, 84 of Ontario’s top Grade 12 female science students came to the St. George campus for the “Design a Better World” day and activities, which included hands-on engineering workshops, an alumni panel, a “Mythbusters” student panel, a design team and student organization showcase, and lab tours. Participants had the opportunity to meet current U of T Engineering students, faculty and alumni. The symposium is expected to become an annual event, and future dates will be announced. Read more about the 2014 Young Women in Engineering Symposium.

Highlights for Women in Engineering at U of T

Note: The Ontario School of Practical Science, established in 1873 by order of Provincial Parliament, became the Faculty of Applied Science and Engineering at the University of Toronto in 1906.

1912: First female graduate from U of T Engineering
Hildegarde E. Scott becomes the first woman to graduate from the Faculty of Applied Science and Engineering, earning a bachelor of applied science degree in analytical and applied chemistry.

1920: First female architect in Canada graduates from U of T Engineering
Esther Marjorie Hill receives an a bachelor of applied science degree in architecture (a discipline at that time linked to engineering) from the Faculty of Applied Science and Engineering, and becomes the first female Architect in Canada. Hill was one of only six women to have been admitted to engineering programs at the University between 1906, when the Faculty was founded, and 1923.

1927: First woman to graduate with an engineering degree from U of T
Elsie Gregory MacGill (1905-1980) is the first woman to graduate from U of T with an engineering degree, and the first Canadian woman to earn a degree in electrical engineering. MacGill’s mother, Helen Gregory, was one of two women to graduate from Trinity College in 1886 and would become a judge and advocate of women’s suffrage. Nicknamed “Queen of the Hurricanes,” MacGill was the world’s first female aircraft designer, and during the Second World War she did much to make Canada a powerhouse of aeronautical industry. In 1938, she became the first woman elected to corporate membership in the Engineering Institute of Canada.

1958: First women graduates with mechanical engineering degree
Lois DeGroot and Madeline Hoare are the first female graduates of the Department of Mechanical Engineering. DeGroot would later become a director of Atomic Energy of Canada and of the Scarborough Hospital.

1964: First woman joins the Department of Chemical Engineering & Applied Chemistry
Mary Jane Phillips becomes a lecturer in catalysis, receiving tenure in 1977 and retiring from the department in 1997.

1967: First woman joins the Department of Metallurgy and Materials Science (now Materials Science and Engineering)
Ursula Franklin joins the Faculty, a pioneer in the field of archaeometry, which applies modern materials analysis to archaeology. As a child in Germany during the Second World War, Franklin had survived a forced-labour camp, and later became a tireless champion of pacifism and peace as well as for the rights of girls and women. She received a Governor General’s Award in Commemoration of the Person’s Case (1929) for advancing the equality of girls and women in Canada.

1973: First woman joins the Department of Civil Engineering
Eva Kuhn becomes an assistant professor in Civil Engineering, teaching mechanics and graphics, and remains in the department until her retirement in 2013.

2006: University welcomes Cristina Amon, the Faculty’s first female dean
Cristina Amon becomes the first female dean of the Faculty of Applied Science & Engineering, as well as Alumni Professor of Bioengineering in the Department of Mechanical & Industrial Engineering. She is a pioneer in the development of Computational Fluid Dynamics. Her research focuses on nanoscale thermal transport in semiconductors, energy systems and bioengineered devices.

2006: First woman appointed as a Faculty vice-dean
Brenda McCabe, a professor in the Department of Civil Engineering, is named Vice-Dean, Graduate. Her areas of expertise include construction in operating facilities, performance benchmarking, and risk modeling and analysis.