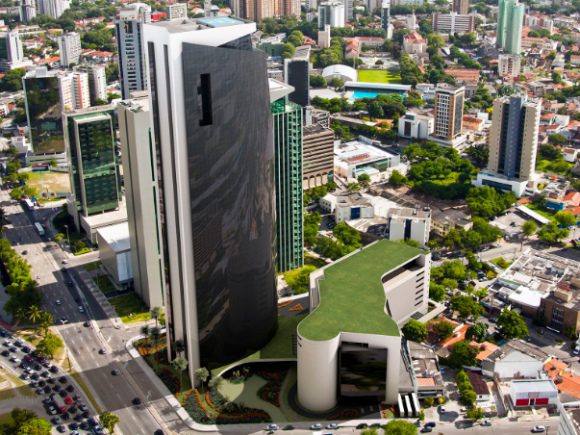 On 16 December 2014, the Municipal Council of Recife, Brazil, approved the Green Roof Law. This law requires buildings with more than four floors to have their roofs covered with native vegetation. The law also applies to any commercial building with more than 400 square meters.

While attending the Urban-LEDS European Study Tour last April, Evelyne Labanca, President of Recife’s Planning Institute and responsible for coordination of the project, has been inspired by Copenhagen’s Green Roof Policy and Planning shared in one of the presentations during that Tour. This tangible result of the Tour proves the success of the Urban-LEDS projects’ ambition and objective of facilitating exchange of best practices between cities and thus sparking new ideas for low emission development strategies.

The first example of a building with a “green roof” in Recife will be the Torre Charles Darwin, a 35-storey building under construction in the center of the city. The building will have a cover crop of 2.8 million square feet, along with a tank to capture rainwater, which will be used to power the air conditioning system.

This initiative builds on previous work in Recife. Recife is one of two Urban-LEDS model cities in Brazil. As much as 46 percent of Recife’s total area is green, 60 percent of which is protected under conservation laws. An Urban Afforestation plan aims at preserving and increasing this unique environment. The Apibaribe River Navigability Project is focused on ensuring that the six rivers and 66 canals of the city are used as alternative sustainable routes. A planned increase in bike lanes and the creation of bus corridors to facilitate commuters and reduce private transport are other initiatives undertaken by the city government to reduce its impact on the environment and overall CO2 emissions.