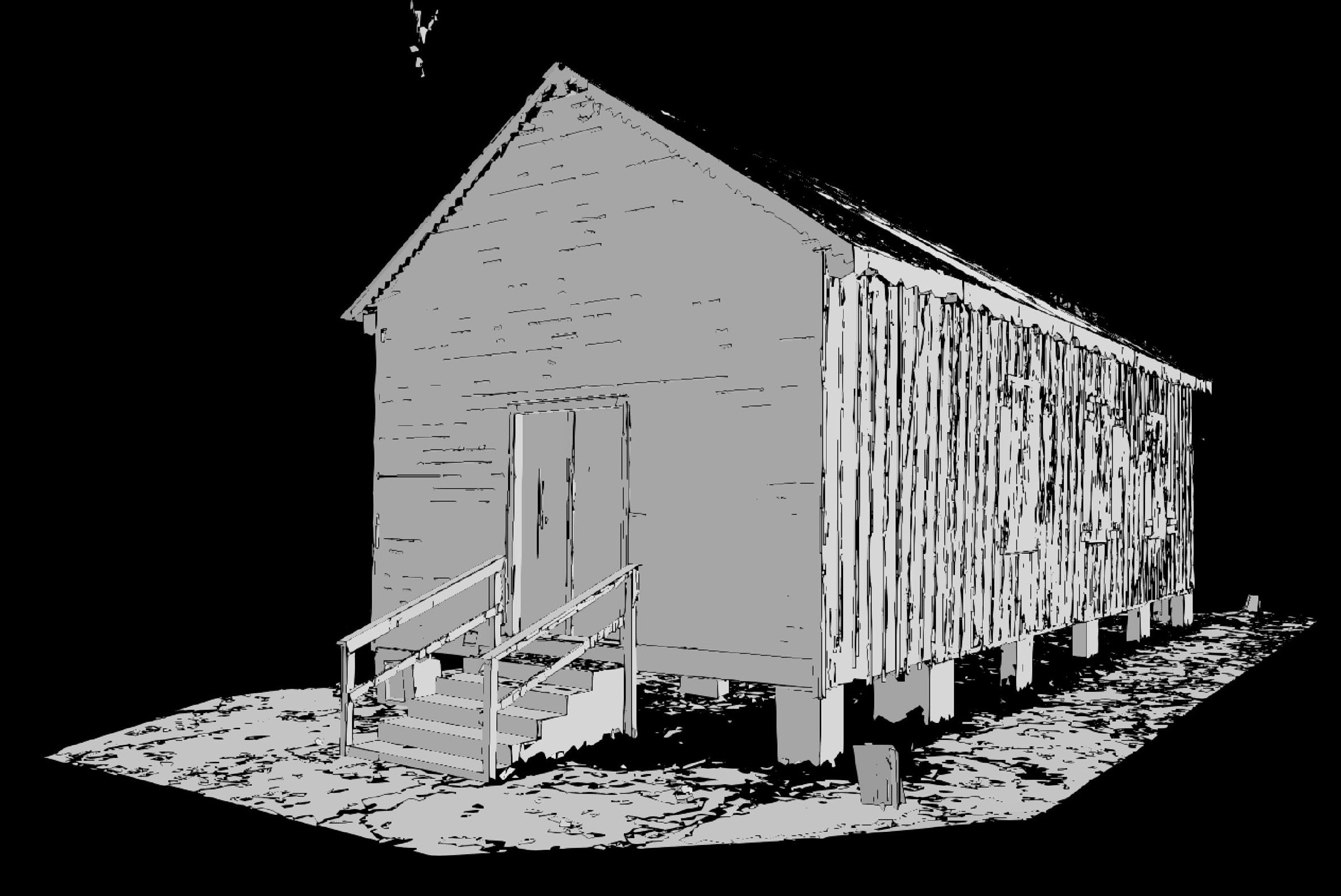 Shepperton Studios, Jan. 27, 2015—Laser  scanner modelling software from Arithmetica is helping to preserve some of New  Orleans’ oldest and most historically important buildings. Using the Pointfuse  point cloud processing software, Scan-Nola, a heritage preservation project is  creating detailed 3D computer models directly from laser scanned data. The  resulting models
provide digital preservation for often derelict or  deteriorating structures that can be used for conservation and restoration  works, as well as garnering interest and support from the local  community.

The first project to be completed by Scan-Nola using the  Pointfuse processing software was the production of 3D models of the famous Dew  Drop Inn. Located on Lamarque Street in the heart of Old Mandeville, Louisiana,  the original small wooden building is considered the world’s oldest, virtually unaltered, rural jazz dance hall. It was built in 1895, which is generally
agreed as the year of the birth of traditional jazz in New  Orleans.

Scan-Nola undertook the data capture element of the  project with collaboration from surveying company Haag & Trammel. Using a  Faro Focus X330 laser scanner, a two man team completed 13 scans in total – 9  exterior and 4 interior – within a couple of hours. These scans generated in the  region of 12 million individual RGB coloured point measurements. Using  Pointfuse, the data was transformed from high density point clouds into detailed  DXF files for onward use in free to use, open source, professional computer  graphics software, Blender.

“I knew I needed an easy processing  workflow to transform the point clouds into models that could be used in  animations and virtual reality models. Unfortunately the software we wanted to  use was not compatible with the original point cloud files; in fact when we  tried to import point clouds it became so slow it was virtually unusable,” said  Antoine Cottin, co-founder of
Scan-Nola, “So, Pointfuse made the impossible  possible! It allowed us to create compatible models with plenty of detail. This  also speeded up the processing workflow by at least a factor of a  hundred.

“Having tested a number of resolutions two DXF files were  created; one of the inside and one of the outside. These files will be used to  create clean mesh models in order to optimise their use in animations and for  virtual visits,” continued Cottin. “The whole process was quick and easy. In  fact one of the hardest parts of the whole process was a result of the fact that the building doesn’t have a single straight wall! However with Pointfuse we can  now accurately measure the building’s  deformations.”

Pointfuse is a powerful modelling engine developed by  Arithmetica. Pointfuse gives professionals an astonishingly fast, precise and  flexible way of converting the vast point cloud datasets generated by laser  scanners such as LiDAR into high fidelity vector models.  Taking data from  laser scanners mounted on vehicles, survey planes, tripods and even people and  designed for
engineers, architects and construction professionals, Pointfuse  uses advanced statistical techniques to create vector models which can then be manipulated using any industry-standard CAD system.

Uniquely,  Pointfuse is fully mobile compatible, and can process data from mobile scanners  as easily and quickly as from terrestrial or airborne systems – and its results  can be output and used on standard handheld mobile devices for use in the field.  Pointfuse is also the first software to offer truly automatic feature  extraction. It automatically identifies features such
as power-lines, bridges,  gantries and crash barriers within the point cloud and extracts them within a  matter of minutes.

Arithmetica is an innovator in 360-degree  imaging solutions and automated laser scanning data processing software.   Located at the world famous Shepperton Studios near London, Arithmetica is the  company behind SphereVision and Pointfuse. Arithmetica is an inventive software  house that develops ground breaking software solutions to solve real world  scientific, medical and engineering problems. Arithmetica builds on more than  thirty years of television and film production to develop software for clients  around the world. Arithmetica solutions handle complex data rich information and  are simple
and easy to use.