Natural Breakdown of Petroleum Underground Can Lace Arsenic into Groundwater 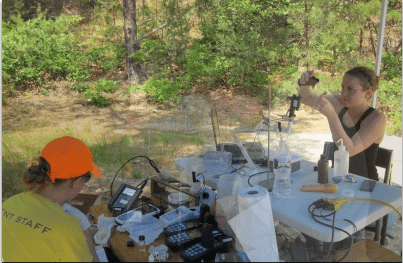 In a long-term field study, U.S. Geological Survey (USGS) and Virginia Tech scientists have found that changes in geochemistry from the natural breakdown of petroleum hydrocarbons underground can promote the chemical release (mobilization) of naturally occurring arsenic into groundwater. This geochemical change can result in potentially significant arsenic groundwater contamination.

While arsenic is naturally present in most soils and sediments at various concentrations, it is not commonly a health concern until it is mobilized by a chemical reaction and dissolves into groundwater. Elevated arsenic levels in groundwater used for drinking water is a significant public health concern since arsenic, a toxin and carcinogen, is linked to numerous forms of skin, bladder, and lung cancer.

For the past 32 years, a collaborative group of government, academic, and industry-supported scientists have studied the natural attenuation (biodegradation over time) of a 1979 petroleum spill in the shallow, glacial aquifer at the National Crude Oil Spill Fate and Natural Attenuation Research Site, near Bemidji, Minnesota.

Working at this intensively surveyed site, the researchers in this USGS-led investigation focused on a specific question: whether naturally occurring arsenic found in the glacial aquifers in this area might be mobilized in the presence of hydrocarbons because of chemical interactions involving iron hydroxides which also occur naturally. To address this question, arsenic concentrations were measured for several years in groundwater and in sediment up-gradient, within, and down-gradient from the hydrocarbon plume at Bemidji.

The scientists attributed the elevated arsenic in the hydrocarbon plume to a series of interrelated geochemical and biochemical processes that involve arsenic and iron oxides (both are commonly found in sediments across the country) and the metabolization of carbon–rich petroleum by microbes in anoxic (low oxygen) conditions. The complex chemical process is explained further at this USGS website and in the published research article.

The results from this work also suggest that the arsenic released in the plume may reattach to aquifer sediments down-gradient from the plume. This reattachment could be considered good news for limiting the extent of the arsenic contamination in the groundwater. However, the chemical reattachment process may also be reversible, highlighting the need for long–term monitoring of arsenic and other chemicals that pose a water quality concern in areas associated with petroleum hydrocarbon leaks and spills.

The presence and amount of naturally occurring arsenic and iron oxides and the condition of the groundwater in the study area are fairly typical of many geologic settings across the nation, suggesting that the process of arsenic mobilization that was observed in the presence of hydrocarbons is not geographically limited.

This research was supported by the USGS Toxic Substances Hydrology Program and Hydrologic Research and Development Program, the Virginia Polytechnic Institute and State University, and the National Crude Oil Spill Fate and Natural Attenuation Research Site, a collaborative venture of the USGS, the Enbridge Energy Limited Partnership, the Minnesota Pollution Control Agency, and Beltrami County, Minnesota. By law, the USGS, a science bureau of the U.S. Department of the Interior, does not have any regulatory authority or responsibility.