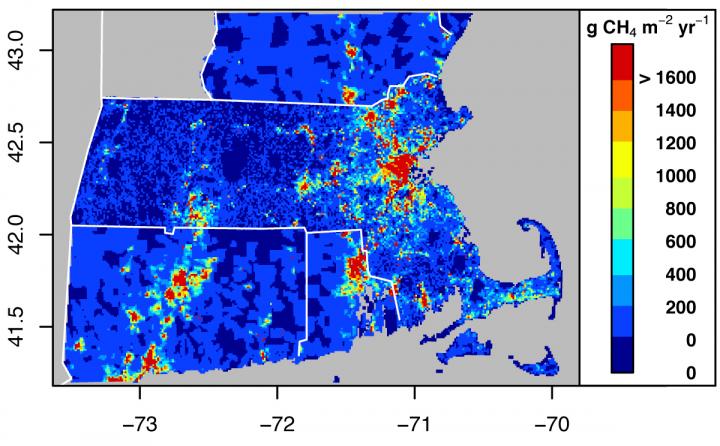 Cambridge, Mass., Jan. 22, 2015—Imagine if every time you filled your car with gas, a few gallons didn’t make it into the tank and instead spilled onto the ground. That’s essentially what happens every day with the aging system of underground pipes and tanks that delivers natural gas to Boston-area households and businesses, with adverse economic, public health, and environmental consequences. Now a group of atmospheric scientists at Harvard School of Engineering and Applied Sciences (SEAS) has produced hard numbers that quantify the extent of the problem.

The Harvard-led team estimates that each year about 15 billion cubic feet of natural gas, worth some $90 million, escapes the Boston region’s delivery system. They calculated that figure by placing sophisticated air monitoring equipment in four locations: two atop buildings in the heart of Boston, and two at upwind locations well outside of the city. Then they analyzed a year’s worth of continuous methane measurements, used a high-resolution regional atmospheric transport model to calculate the amount of emissions, and concluded that:

The findings have implications for other regions, especially cities that, like Boston, are older and rely on natural gas for a significant and increasing portion of their energy needs. While policymakers have focused on the production end of the natural gas supply chain–wells, off-shore drilling platforms, and processing plants–much less attention has been paid to the downstream gas delivery infrastructure. The new study, published today in the Proceedings of the National Academy of Sciences (PNAS), suggests that intra-city distribution and end use systems may contribute more to the nation’s overall methane emissions than previously understood.

“There’s been a lot of interest in controlling methane emissions, but emissions from the distribution and use side of the natural gas system have been almost absent from the recent national policy conversation,” said Kathryn McKain, a Harvard graduate student who led the study with her adviser, Steven C. Wofsy, Abbott Lawrence Rotch Professor of Atmospheric and Environmental Science at SEAS. Wofsy is also an associate of the Harvard Forest, where one of the monitoring stations was established.

There are other possible sources of atmospheric methane, including landfills, sewage, agricultural operations, and wetlands. But, unlike commercial natural gas supplies, these sources don’t release ethane. Monitoring for trace ethane levels, therefore, allowed the researchers to pinpoint methane that was released by the natural gas delivery system. The team also compared their results to actual natural gas ethane content derived from operators of the major pipelines that serve the region.

Natural gas is dramatically “cleaner” compared to coal or oil, as measured by the amount of carbon dioxide (CO2) released per unit of energy. And natural gas is now providing a higher share of the nation’s energy mix, due largely to deployment of extraction techniques such as hydraulic fracturing (fracking) that have brought prices down.

“This study helps us better understand where and how much methane is lost to the atmosphere while in transit from the well to where it’s used,” Wofsy said. “It’s important to understand these losses so that we can design policies that will help us realize the environmental benefits of natural gas versus other energy sources.”

Wofsy and McKain added that tackling the natural gas loss problem will require innovative policymaking. Currently, low prices and the way in which natural gas suppliers are regulated mean that they have little economic incentive to make the necessary investments to reduce incidental losses from leakage.

Other researchers participating in the study are from Boston University, Duke University, Aerodyne Research, Inc., and Atmospheric and Environmental Research, Inc. The work received funding from the TomKat Charitable Trust, Boston University College of Arts and Sciences, the National Science Foundation (1337512, 1265614, 1302902, 0948819), the National Aeronautics and Space Administration (NNX14AK87H, NNX12AM82G, NNH13CK02C, NNX11AG47G), and the Environmental Defense Fund.