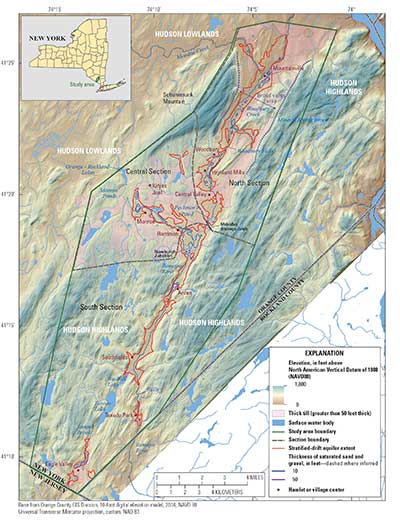 TROY, N.Y. – Several areas with modest water-resource potential within the valleys of the Ramapo River and Woodbury Creek have been identified in eastern Orange County, New York. The most favorable of these areas are mostly within the northern half of the 23-mile long study area, between Arden and Mountainville according to a recent U.S. Geological Survey study.

The study area in eastern Orange County, New York has undergone substantial population growth in recent decades in part because major transportation corridors pass through it and provide access to the New York metropolitan area Water-resource information is essential for future water-supply and development planning. USGS completed the study in cooperation with the New York State Department of Environmental Conservation. Currently, groundwater supplies serve more than 80 percent of residents in the area.

“This study is intended to put basic facts into the hands of those responsible for making decisions on future groundwater use and protection,” said USGS scientist Paul Heisig, who led the evaluation. “We have identified and mapped a number of aquifer areas and described their current use and their potential as groundwater sources.” The degree of interconnection among favorable aquifer areas, however, is largely unknown.

Both unconfined and confined sand and gravel aquifers were identified.  Unconfined aquifers generally have the highest potential for water supply in areas where water from lakes and rivers can be induced to infiltrate into the aquifer by pumping wells. However, these aquifers are most susceptible to pollution from land use because coarse-grained sediments near land surface can readily receive recharge.

The report, interactive map are online.

Comments are disabled
NEXT ARTICLE
LaHood Joins the Board of the Lincoln Institute of Land Policy
January 22, 2015
PREVIOUS ARTICLE
New Release of Bentley Map Brings Information Mobility to the Forefront with Expanded Interoperability
January 22, 2015