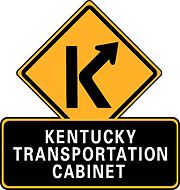 Matt Ball on January 20, 2015 - in People, Transportation
FRANKFORT, Ky., Jan. 16, 2015—Kentucky Transportation Secretary Mike Hancock has received a national award for his leadership on U.S. highway transportation issues.
Secretary Hancock, a career engineer for the Kentucky Transportation Cabinet (KYTC), recently completed a term as president of the American Association of State Highway and Transportation Officials (AASHTO).
His most recent honor is the Lester P. Lamm Memorial Award, presented annually to a public servant who has exhibited leadership and dedication to U.S. highway transportation programs. The award is named in honor of a longtime executive of the Federal Highway Administration who later was president of the Highway Users Federation.
The award was presented at the annual meeting of The Road Gang, an informal group of business, government and transportation industry executives that dates to 1942 and is based in Washington, D.C.
“I am humbled to have received the Les Lamm award, since it honors a man who was such an influence on transportation throughout much of my own professional career,” Secretary Hancock said.
Secretary Hancock currently serves on the Executive Committee of the AASHTO Board of Directors and as chairman of the AASHTO Standing Committee on Planning. He also is a member of the Executive Committee of the Transportation Research Board, a national panel that guides transportation research in the United States, and is a past president of SASHTO – the Southeastern Association of State Highway and Transportation Officials.
Having been responsible for preparation of the Kentucky Highway Plan for many years, he has worked closely with local, state and national leaders in the area of project needs prioritization and transportation program funding issues.
In the course of his long career, he also has served the cabinet as state highway engineer, chief of staff and deputy state highway engineer for program planning and management, among other positions.
He is a native of Princeton, in Caldwell County, and a graduate of the University of Kentucky. Secretary Hancock and his wife, Marla, have three adult children and a grandson.