/ Analysis / CalWater Campaign to Research How California Gets Its Precipitation

CalWater Campaign to Research How California Gets Its Precipitation 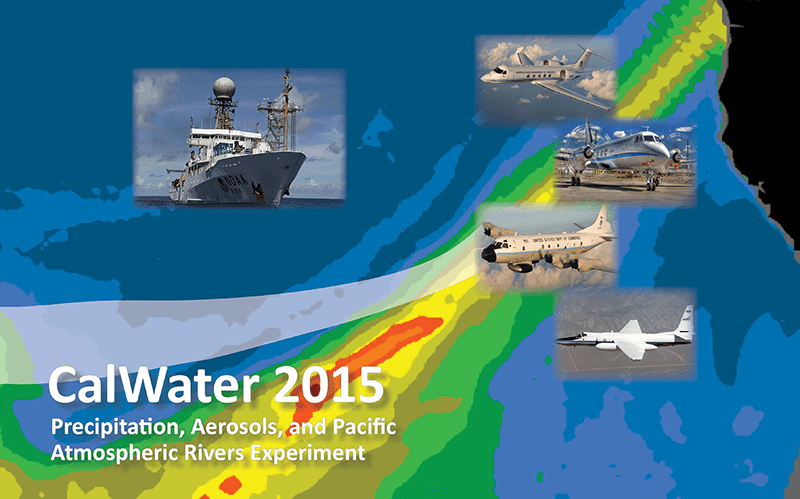 SAN DIEGO, Jan. 19, 2015—In the midst of the California rainy season, scientists are embarking on a field campaign designed to improve the understanding of the natural and human-caused phenomena that determine when and how the state gets its precipitation. They will do so by studying atmospheric rivers, meteorological events that include the famous rainmaker known as the Pineapple Express.

The study will help provide a better understanding of how California gets its rain and snow, how human activities are influencing precipitation, and how the new science provides potential to inform water management decisions relating to drought and flood.

“After several years in the making by an interdisciplinary science team, and through support from multiple agencies, the CalWater 2015 field campaign is set to observe the key conditions offshore and over California like has never been possible before,” said Scripps climate researcher Marty Ralph, a CalWater lead investigator. “These data will ultimately help develop better climate projections for water and will help test the potential of using existing reservoirs in new ways based on atmospheric river forecasts.”

Like land-based rivers, atmospheric rivers carry massive amounts of moisture long distances – in California’s case, from the tropics to the U.S. West Coast. When an atmospheric river hits the coast, it releases its moisture as precipitation. How much and whether it falls as rain or snow depends on aerosols – tiny particles made of dust, sea salt, volatile molecules, and pollution.

The researchers will examine the strength of atmospheric rivers, which produce up to 50 percent of California’s precipitation and can transport 10-20 times the flow of the Mississippi River. They will also explore how to predict when and where atmospheric rivers will hit land, as well as the role of ocean evaporation and how the ocean changes after a river passes.

“Climate and weather models have a hard time getting precipitation right,” said Ralph. “In fact, the big precipitation events that are so important for water supply and can cause flooding, mostly due to atmospheric rivers, are some of the most difficult to predict with useful accuracy. The severe California drought is essentially a result of a dearth of atmospheric rivers, while, conversely, the risk of Katrina-like damages for California due to severe ARs has also been quantified in previous research.”

For the next month or more, instrument teams will gather data from the NOAA research vessel Ronald H. Brown and two NOAA, one DOE, and one NASA research aircraft with a coordinated implementation strategy when weather forecasters see atmospheric rivers developing in the Pacific Ocean off the coast of California. NASA will also provide remote sensing data for the project.

“Improving our understanding of atmospheric rivers will help us produce better forecasts of where they will hit and when, and how much rain and snow they will deliver,” said Allen White, NOAA research meteorologist and CalWater 2015 mission scientist. “Better forecasts will give communities the environmental intelligence needed to respond to droughts and floods.”

Most research flights will originate at McClellan Airfield in Sacramento. Ground-based instruments in Bodega Bay, Calif., and scattered throughout the state will also collect data on natural and human contributions to the atmosphere such as dust and pollution.
This data-gathering campaign follows the 2009-2011 CalWater1 field campaign, which yielded new insights into how precipitation processes in the Sierra Nevada can be influenced by different sources of aerosols that seed the clouds.

“This will be an extremely important study in advancing our overall understanding of aerosol impacts on clouds and precipitation,” said Kimberly Prather, a CalWater lead investigator and Distinguished Chair in Atmospheric Chemistry with appointments at Scripps Oceanography and the Department of Chemistry and Biochemistry at UC San Diego. “It will build upon findings from CalWater1, adding multiple aircraft to directly probe how aerosols from different sources, local, ocean, as well as those from other continents, are influencing clouds and precipitation processes over California.”

“We are collecting this data to improve computer models of rain that represent many complex processes and their interactions with the environment,” said PNNL’s Leung. “Atmospheric rivers contribute most of the heavy rains along the coast and mountains in the West. We want to capture those events better in our climate models used to project changes in extreme events in the future.”

Prather’s group showed during CalWater1 that aerosols can have competing effects, depending on their source. Intercontinental mineral dust and biological particles possibly from the ocean corresponded to events with more precipitation, while aerosols produced by local air pollution correlated with less precipitation.