Siemens to Modernize the Signaling System of the Düsseldorf Light Railway 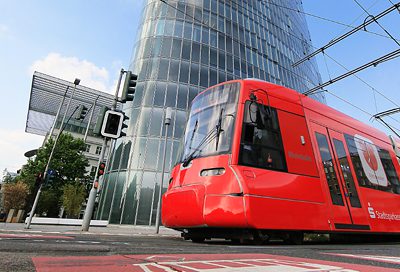 The mass transit company, Rheinbahn AG, has commissioned Siemens to bring the signaling system of the Düsseldorf Light Railway up to the state of the art over the next few years. As the inner-city tunnel of the Rheinbahn is on one of the busiest light rail lines in the state of North Rhine-Westphalia, conversion will take place in several stages to avoid disrupting transit services. This line is around 11 kilometers long and is scheduled to be reopened in autumn 2018.

Düsseldorf started building the light rail system in the 1970s and 1980s. The equipment in the tunnels is therefore now between 30 and 40 years old. As spare parts are no longer available for this old technology, the signaling system needs to be modernized.

Siemens will equip the lines with the Trainguard ZUB 222 train protection system for semi-automated operation. The driver will still drive and brake the train manually, but a train protection system will monitor its speed continuously. The Controlguide Vicos OC operations control system will automatically supervise and control the trains. The present relay interlocking will also be replaced by a Trackguard Sicas ECC electronic interlocking.

Rheinbahn operates 110 bus and light rail and commuter rail routes, carrying around 720,000 passengers each weekday in an area with over one million inhabitants. It has a fleet of 135 LRT vehicles, 175 trams and 425 buses which serve no less than 1,651 stops. Each year, these vehicles cover some 48.2 million kilometers, which is 130 times the distance from the Earth to the moon.

Comments are disabled
NEXT ARTICLE
CalWater Campaign to Research How California Gets Its Precipitation
January 19, 2015
PREVIOUS ARTICLE
Oceano Opts for Green Solutions for Water and Energy to Reduce their Impact
January 19, 2015