/ Analysis / Bicyclists Willing to Ride Up to 3 Miles to Catch Bus, Train

Bicyclists Willing to Ride Up to 3 Miles to Catch Bus, Train 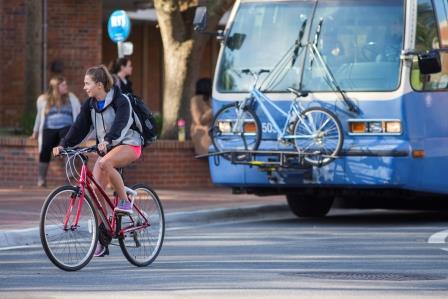 GAINESVILLE, Fla., Jan. 17, 2015—If three American metro areas are any indication, few people ride their bicycles to a bus or train station to commute to work, and those who do only travel an average of 1 to 2 miles. That suggests to a University of Florida researcher that American cities should make the 2-mile radius around transit hubs more bike-friendly.

Hochmair had expected to find more people riding their bicycles to transit hubs based on statistics on commuters from other countries. He cited the Netherlands, where 35 percent of those who ride the bus or train take their bikes to a transit hub.
“That shows what would be possible with appropriate infrastructure and transit policies,” he said.

Bicycling fatalities are up recently. Florida deaths rose by 37 from 2010 to 2012, up to 120, according to a 2012 study by the Governors Highway Safety Association, a nonprofit group that pushes government to improve bicycle safety. These figures underscore Hochmair’s push for better bicycle infrastructure, which may bring the added bonus of more cyclists to transit hubs.

But there are challenges.

Since U.S. cities are built for cars, using five- or six-lane highways, surrounded by shopping centers and subdivisions, there is little room or incentive for alternative transportation, Hochmair said. Additionally, roads in many neighborhoods often contain cul-de-sacs and looping roads, resulting in longer distances for bicyclists to travel. This further discourages bicycling in urban and suburban areas, he said.

“The overall goal of transportation planners is to reduce the dependency on individual car traffic and reduce congestion,” said Hochmair, an Institute of Food and Agricultural Sciences faculty member. The average U.S. commute time for a full-time worker is 23 minutes by car, thus too far to walk and possibly too far to cycle, he said. “Using bike and transit combined is a viable alternative to car traffic.”

As part of his research program, Hochmair uses geographic information systems to quantify how road and transit hub designs affect people’s travel behavior and how improving those networks can make transportation more sustainable, for example, by encouraging cycling, walking, and riding buses and trains.

Hochmair’s research is published in the current issue of International Journal of Sustainable Transportation.

Comments are disabled
NEXT ARTICLE
Liberty State Park Gets a Replacement for Bridge Swept Away by Sandy
January 18, 2015
PREVIOUS ARTICLE
Tucson Leverages New Technology to Develop App for Both Parking And Transit
January 18, 2015