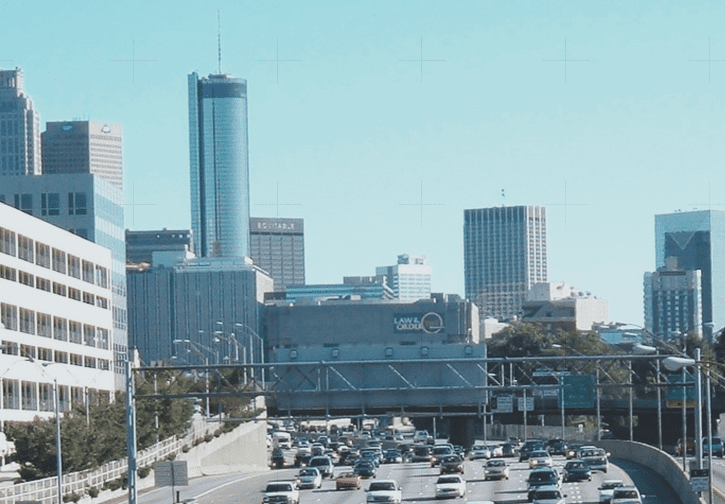 Atlanta, Jan. 13, 2015—Central Atlanta Progress (CAP) and the Midtown Alliance today announced the Atlanta Bridgescape Competition, a design competition seeking a broad range of proposals for conceptual designs to reconceive and enhance two existing Interstate bridges – one in Midtown at 10th Street and one in Downtown at Courtland Street/Ralph McGill Boulevard.

The Atlanta Bridgescape Competition will be conducted in collaboration with the Architecture and Design Center and will coincide with the 2015 National Convention of the American Institute of Architects, held in Atlanta, May 14th – 16th, 2015, where winning entries, one for each bridge, will be announced.  Each winning team will be awarded $8,000. This competition is of special significance as it is the 20th Anniversary of the “Legacy Project” for the Atlanta Chapter of The American Institute of Architects (AIA ATL). The Legacy Project began here in Atlanta in 1995 and has been a tradition of each national convention since that time.  A Student Bridgescape Legacy Charrette will also be conducted during this convention. The keynote address of the convention will be given by President Bill Clinton, Founder of the Clinton Foundation, and 42nd President of the United States.

“This Bridgescape design competition allows us to tap into the best design talent and create a highly visible and lasting legacy for our City,” said Kevin Green, CEO and president of Midtown Alliance.   “We believe it will be a model for subsequent phases of work that will enhance the Connector.”

The Competition is a part of the overall I-75/85 Connector Transformation Project that was initiated to enhance the visual appearance of the Connector, to create a positive economic impact for the City and to improve the experience of pedestrians and motorists who travel along the roadway each day. The project seeks to develop innovative approaches that go beyond beautification to address multiple issues like connectivity, pedestrian and bicycle mobility, and sustainability.

“We are pleased to announce the Atlanta Bridgescape Competition as the next iteration of the Connector Transformation Project,” said AJ Robinson, CAP President. “We are very excited to see what the creative minds of the design world can imagine for the second phase of the gateway bridge enhancements.”

For more information about the Atlanta Bridgescape Competition, visit www.AtlantaBridgescapeCompetition.com.

About Midtown Alliance: Midtown Alliance is a non-profit membership organization and a coalition of leading business and community leaders – united in our commitment to Midtown as a premiere destination for commerce, culture, education and living.  Guided by a visionary master plan – Blueprint Midtown – and in partnership with the Midtown Improvement District, our mission is to improve and sustain the quality of life for those who live, work and play here. Midtown Alliance accomplishes this goal through a comprehensive approach to planning and development that includes initiatives to enhance public safety, improve the physical environment, and strengthen the urban amenities which give the area its unique character. www.MidtownATL.com

About Central Atlanta Progress / Atlanta Downtown Improvement District: Central Atlanta Progress, Inc., is a Downtown business association with approximately 200 members. Its mission is to champion a livable, vibrant and economically robust Downtown community as the heart of the Atlanta region.  The Atlanta Downtown Improvement District is a 501(c)(3) non-profit, charitable corporation created by CAP to make Downtown safer, cleaner and more hospitable. For more information about CAP/ADID, visit www.atlantadowntown.com.

About the Architecture and  Design Center: The Architecture and Design Center (ADC) is an Atlanta based non-profit (501c3) organization dedicated to creating an alliance of organizations and individuals who develop and promote initiatives that advance the public’s understanding of architecture and design and the benefits of a well designed built environment. Central to ADC’s work is the understanding that everything in our world is designed. If designed well, the lives of people are enhanced.  If designed poorly, it detracts from the quality of life. The more people who understand design, how it works and how it shapes our lives, the more effective advocates we will have to promote good design in our communities.

About AIA Atlanta: With approximately 1,700 members throughout the Greater Metro Atlanta area, the Atlanta Chapter of The American Institute of Architects (AIA ATL) is an energetic, creative, and agile advocate for architects, design professionals, students, and the general public.

Our diverse membership is comprised of professionals from a variety of backgrounds–traditional firms, allied professional firms, retired professionals, colleges, universities, government centers, product showrooms, manufacturing facilities, and home offices–all members have one connecting and powerful thread in common: a fine appreciation of architecture and design.