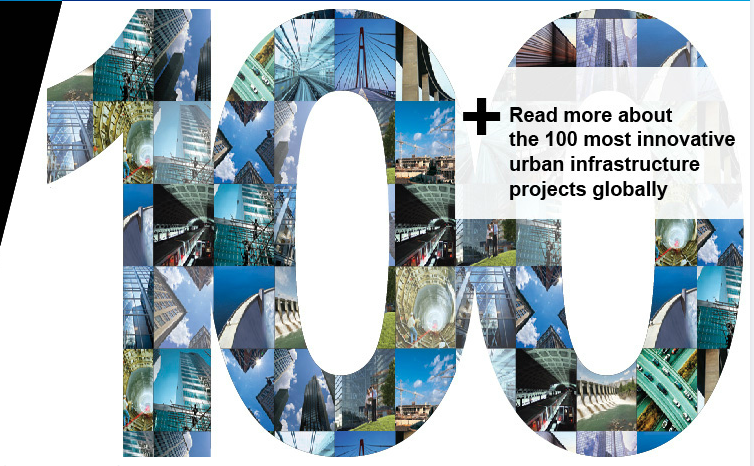 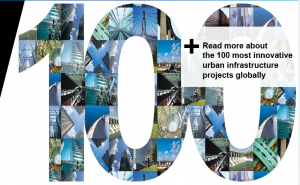 The aim of Infrastructure100 is to showcase and celebrate one hundred examples of great projects underway in cities around the world.

The development of sustainable urban infrastructure is one of the greatest challenges of the 21st century. With more than half of the global population already squeezed into cities that, collectively, make up less than two percent of the planet’s land cover, the pressure now being placed on urban infrastructure is unprecedented. This worldwide demand for infrastructure is expected to require the investment of tens of trillions of dollars over the next four decades in order to create and maintain sustainable and highly-liveable urban areas that balance the needs of the population, the economy and the environment.

To that end, KPMG’s Global Infrastructure Practice is pleased to announce the much-anticipated second edition of the Infrastructure 100: World Cities Edition – a high-profile report showcasing 100 of the most innovative and inspiring urban infrastructure projects from around the world. Released at the World Cities Summit in Singapore, this edition provides insight into the infrastructure projects that make great cities, with a particular focus on the innovations that make them ‘Cities of the Future’ – places where people want to live and do business.

“Existing urban infrastructure is in urgent need of revitalization, and demands for new infrastructure have skyrocketed to meet the basic needs of growing populations. The world’s cities are already home to more than half the world’s population, and that number is expected to jump by more than three billion by 2050,” said Nick Chism, KPMG’s Global Head of Infrastructure. “The World Cities Edition looks specifically at the challenges faced by cities around the world and features 100 innovative projects that can inspire readers to conceive, finance and develop infrastructure projects that make a positive difference to the cities we live in.”

From managing exploding urban population growth to updating aging infrastructure or effectively managing a declining population and tax base, each region of the world faces major infrastructure challenges that must be met in order to ensure the economic health of the region.

“Cities are playing an ever more important part in their country’s economy. However, current global economic conditions and austerity measures have resulted in a need to identify innovative infrastructure solutions to deliver the required investments,” said James Stewart, KPMG’s Chairman of Global Infrastructure. “Strategic city infrastructure projects are delivering economic renewal by connecting communities and increasing jobs while delivering tangible long-term impacts and growth. But the importance of investing in sound, smart infrastructure cannot be overstated.”

Infrastructure 100: World Cities Edition
The projects showcased in the Infrastructure 100 are made up of approximately 20 projects selected by independent judging panels of industry experts from five regions of the world, including: Asia Pacific, North America, Latin America, Europe, and the Middle East and Africa. Projects were then sorted into 10 project categories, including: Urban Mobility, Global Connectivity, Urban Regeneration, Education, Healthcare, Water, New and Extended Cities, Recycling and Waste Management, Urban Energy Infrastructure, and Communications Infrastructure.

Of the 100 projects identified by the regional judging panels, 10 were selected by a global judging panel as being the most noteworthy within each project category. The 2012 feature projects include:

View a complete list of the 100 projects online at: www.kpmg.com/infrastructure100

About KPMG
KPMG is a global network of professional firms providing Audit, Tax and Advisory services. We operate in 152 countries and have 145,000 people working in member firms around the world. The independent member firms of the KPMG network are affiliated with KPMG International Cooperative (“KPMG International”), a Swiss entity. Each KPMG firm is a legally distinct and separate entity and describes itself as such. For more information, visit www.kpmg.com.