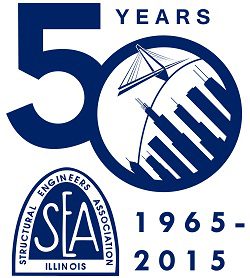 Please join us on Tuesday, March 3, 2015 for the March Dinner meeting. This program is dedicated to SEAOI’s 50th Anniversary, with each meeting focusing on a significant project from each decade of SEAOI’s history. This month highlights the 1980s. Dr. R. Shankar Nair, SE of exp US Services, Inc. will discuss the Innovative Buildings of the 1980s which were built in Chicago.

The 1980s did not see a continuation of the unprecedented burst of super-tall building activity that took place in Chicago in the 1960s and 70s (John Hancock, Standard Oil, Sears); but many of the 1980s projects incorporated an extraordinary level of structural innovation.

For the Chicago Mercantile Exchange Center (10/30 S. Wacker Drive), development imperatives required two 49-story office towers, each with a plan area of almost 30,000 sf, and a 40,000 sf column-free trading hall, all on a site of only 80,000 sf.  This was achieved by cantilevering each tower 32 ft over the trading hall using a shear-panel transfer system.

For 900 North Michigan, where 2,000,000 sf of floor area is distributed almost equally among residential, office, hotel and retail uses, the best structural solution proved to be a 37-story concrete structure seated on a 30-story steel structure.

At 100 North Riverside, an active rail yard covering almost the entire site had defeated all previous attempts at development.  The site was unlocked by a system of steel transfer girders above the tracks and a set of cantilevered steel trusses on the roof from which part of the building was suspended.

The extension of the CTA rail system to O’Hare Airport required construction of a new underground station beneath an existing multi-level parking garage that had to remain in service at all times, even as existing caissons were cut off to make room for the station.  This was accomplished using post-tensioned transfer girders and top-down construction.

Dr. R. Shankar Nair has more than 45 years of experience in structural engineering as a designer, researcher, author, and lecturer.  His work has focused on structural engineering for large architectural and civil engineering projects, including the longest tied-arch bridge span in the world and many high-rise buildings.  Dr. Nair has worked for exp US Services and its predecessor firm Teng & Associates since 1995, and before that he was a principal at RTKL Associates in Baltimore and Alfred Benesch & Company in Chicago.  His work has garnered numerous awards, including four “Prize Bridge” awards from AISC and six “Most Innovative Structure” awards from SEAOI.  Dr. Nair chairs the AISC Committee on Specifications and is a past chairman of the Council on Tall Buildings and Urban Habitat.  He received his PhD from the University of Illinois and is licensed to practice in 44 states. He was elected to membership in the National Academy of Engineering in 2005.

The cost of the meeting is $45 for SEAOI Members and $65 for non-members.  Individuals who wish to attend this function should contact SEAOI Executive Assistant Brenda Wiseman at or office@seaoi.org or 312-726-4165 x200, by Friday, January 29 2015.

This promises to be an extremely interesting lecture. This program should be of interest to all members of the construction industry, including architects, engineers, contractors and real estate developers.  SEAOI meetings are open to the public.