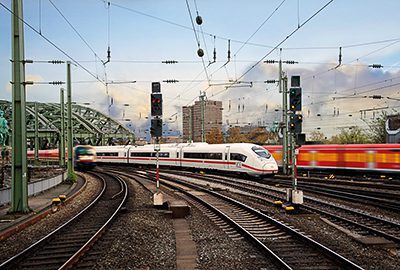 U.S. Secretary of Transportation Anthony Foxx warned, in remarks at an MIT forum on Monday, that America’s “infrastructure deficit” was growing and would worsen without further investment and long-term planning for new technologies.

“Whatever the infrastructure deficit is on paper, it’s probably a multiple of that when you take into account the projects that are not being planned right now because of uncertainty about funding and other aspects of our transportation system,” Foxx told a capacity audience in MIT’s Wong Auditorium.

Foxx emphasized his department’s ongoing work on a 30-year plan focused on the future of transportation in America. He also spoke about a broad range of areas in which technology and innovation can provide economic growth and social benefits, including freight hubs and logistics; high-speed rail; air-safety systems; and auto technologies, including vehicle-to-vehicle safety technology and possibly autonomous vehicles.
“There’s a lot of [new] technology that’s out there right now,” said Foxx, who as the mayor of Charlotte, N.C., earned a reputation for forward-looking transportation policies. “The challenge is to figure out how to integrate it as quickly and as safely as we can.”

He described himself as “bullish” on high-speed rail and also noted improvements in automobile safety made possible by technology. In describing the ongoing decrease in road fatalities, Foxx noted that “the ones we are still left with on an annual basis are really becoming harder and harder” to prevent, but implied that new solutions were still possible.

The forum was hosted by MIT’s Center for Transportation and Logistics (CTL) as part of its Global Leadership Speaker Series. Foxx answered questions in an interview format from CTL Director Yossi Sheffi, the Elisha Gray II Professor of Engineering Systems at MIT.

The event was introduced by MIT President L. Rafael Reif, who praised Foxx for his “refreshing long-term approach to reforming our national transportation strategy.” Reif also lauded the achievements of CTL in a wide variety of fields connected to transportation.

“Quietly, steadily, by using supply chain management to revolutionize essential industries and services, CTL has fundamentally changed the way much of the world works,” Reif said. “Today transportation and supply chain management principles are becoming increasingly central to some of the most pressing issues of our time, including energy, advanced manufacturing, and environmental and urban design.”

Sheffi noted that the U.S. Department of Transportation relies substantially on revenues from gasoline taxes to fund highway programs, and asked Foxx about the eventual consequences of that: “How does it affect transportation spending?”

In response, Foxx said declining funding not only exacerbates the “infrastructure deficit,” but also “starts to create a cloud of uncertainty that makes it very difficult to do the hard political lift of getting the public support to get those projects done.”

Foxx suggested a variety of alternate funding mechanisms, and noted, “Our revenues are declining in the gas tax, part of which is caused by the incredibly efficient vehicles that are now on the road.”

In a lively question-and-answer session, Foxx took multiple questions about high-speed rail, and noted that California is breaking ground this week on a new line linking San Francisco and Los Angeles. That example, he said, might increase the political will to get other projects done.

“Texas might surprise you,” Foxx said, noting the discussed possibility of a Dallas-to-Houston high-speed line.
Foxx also responded to multiple questions about the potential for driverless or largely autonomous autos, which he described as “still a ways away.” In particular, he said, his department has to be concerned about safety issues first, and he suggested that “drivers” of such vehicles would still bear major responsibility for accidents.

“The liability questions will certainly be out there,” Foxx said. “In the short run, I can’t imagine that the liability will shift that greatly away from the driver.” Still, he added, even incremental changes in vehicular automation pose an array of new questions, including how to teach driver education “in a world in which cars are doing more and more of the work.”