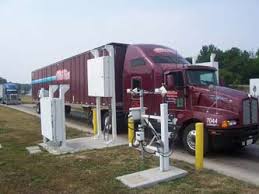 Matt Ball on December 12, 2014 - in Analysis, Corporate, Transportation
FRANKFORT, Ky., Dec. 8, 2014—Kentucky’s innovative use of technology for screening large commercial trucks that pass through the Commonwealth has been named 2014 Project of the Year by the Intelligent Transportation Society of the Midwest. The program is KATS – Kentucky Automated Truck Screening. It employs a license plate reader, U.S. Department of Transportation (USDOT)/ KYU number reader and scene camera technology to collect and process identifying information as a commercial vehicle comes up a weigh station ramp.
KATS is being implemented across the state through efforts of the Kentucky Transportation Cabinet’s Department of Vehicle Regulation, the Kentucky Transportation Center at the University of Kentucky and the Commercial Vehicle Enforcement division of Kentucky State Police.
“KATS is an example of the high quality projects that can come about when groups work toward a common goal,” said Kentucky Transportation Secretary Mike Hancock. “We were proud to be a part of this project and do our part to ensure our roads and those driving on them are as safe as possible.”
The goal of KATS was to create a system that could more quickly identify commercial vehicles and pinpoint and correct violations that posed potential hazards on Kentucky roadways. In 2013, nearly 3.5 million trucks came through Kentucky’s 14 weigh stations. But due to limited staffing and the lengthy time required, only about 1 percent of large trucks were inspected. KATS technology allows trucks to be inspected quickly and efficiently.
As a truck enters a weigh station equipped with KATS, data collection begins immediately. A complete record contains the date and time, vehicle weight, license plate number and jurisdiction, USDOT and KYU numbers, and an overview image. The data is correlated into a single record and is checked against several state and federal systems. In all, 16 tests are run on every vehicle. KATS flags vehicles that fail any tests, but only those violations specified by enforcement are automatically directed to stop.
Research has shown that inspections initiated through KATS tend to have more violations. Finding and correcting these violations results in safer roadways and a possible increase of revenue for Kentucky if KATS also spots tax violations for commercial vehicles.
To date, five KATS systems are operational and four more are being deployed at weigh stations, to be fully operational by the end of 2014.KATS was developed using federal grant money.​ 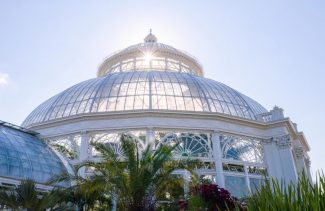 Enid A. Haupt Conservatory at The New York Botanical Garden