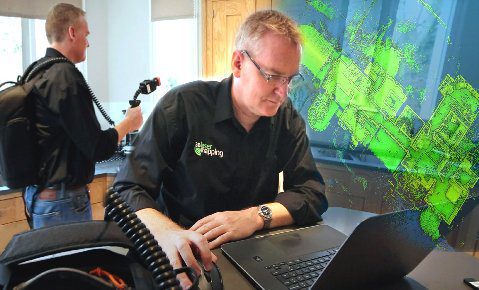 Nottingham, UK, 11 December 2014—3D Laser Mapping has launched a powerful solution that will revolutionise the production of highly accurate building floor plans. Combining the easy to use ZEB1 hand held laser mapping system with intuitive point cloud processing software, the end to end solution will allow users to scan and produce detailed floor plans in a matter of minutes. The combination of scanner and software is set to transform building surveys, delivering both operational and financial savings for survey companies and end clients. This announcement follows an agreement between UK based 3D Laser Mapping, worldwide distributors of the ZEB1 hand held mapper, and PointCab, a German software company specialising in the processing of laser scanned data.

“The combination of ZEB1 and PointCab creates a truly powerful solution for building surveyors,” commented Charlie Whyman, Global Sales and Marketing Manager, 3D Laser Mapping. “Both are easy to use with little or no training, both are fast and effective and both are well supported. Trials of the combined solution have shown that a multi room facility can be scanned, the point cloud data processed and a vector model produced, all in less than twenty minutes.”

PointCab provides a quick and cost effective solution for the management of laser scanned data. Promising to analyse a point cloud in less time that it takes to scan, PointCab builds on the ease of use of the ZEB1 mobile mapper. PointCab also offers an easy to use interface that allows both beginners and professionals to analyse point cloud data without training and with little support. The workflow between the ZEB1 and PointCab is direct and seamless, and models can be output in a range of standard file formats.

Frank Torno, Head of Administration of PointCab added, “The ZEB1 is ideally suited for building surveys as it truly portable and can be operated in confined spaces and difficult to access areas. The seamless workflow of raw data into PointCab combined with the unmatchable speed of processing make the ZEB1 PointCab partnership unbeatable for a range of applications including building surveys.”

Developed by CSIRO and commercialised by GeoSLAM, ZEB1 uses robotic technology called Simultaneous Localisation and Mapping (SLAM). The ZEB1 system includes a lightweight laser scanner mounted on a simple spring mechanism, which continuously scans as the operator walks through the environment. As the scanner loosely oscillates about the spring, it produces a rotation that converts 2D laser measurements into 3D fields of view. Its ability to self-localise makes ZEB1 ideally suited for use indoors, underground and in other covered environments where traditional solutions that utilise GPS don’t function.