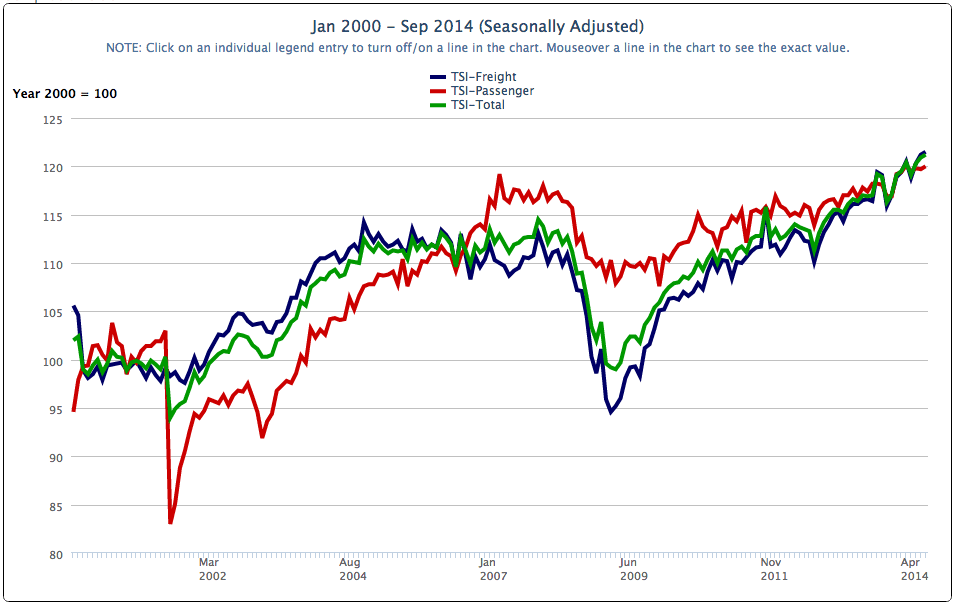 In a new technical report, Transportation Services Index and the Economy—Revisited, BTS reported that the two components of the TSI – the freight index and the passenger index – both lead the economy, although in different ways.

BTS extended the TSI back to 1979, examining five re­cessions and numerous growth cycles. “When the accelerations and decelera­tions of the freight TSI are compared to the growth cycles of the economy, the freight measure leads by an average of approximately four months,” BTS said. “The passenger TSI exhibits fewer turning points, which were then identified as leading the business cycles of re­cession and expansion, also by approximately four months.”

Turning points are times when the movement of an economic series changes direction.  For example, when TSI begins to decline after having increased, or when the economy begins to recover after a recession.

BTS has issued the TSI monthly since March 2004. The Freight TSI measures the month-to-month changes in freight shipments by mode of transportation in tons and ton-miles, which are combined into one index. The index measures the output of the for-hire freight transportation industry and consists of data from for-hire trucking, rail, inland waterways, pipelines and air freight. The passenger TSI measures the month-to-month changes in travel that involves the services of the for-hire passenger transportation sector. The seasonally-adjusted index consists of data from air, local transit and intercity rail.

@ARTBA, Construction Industry Allies Develop COVID-19 Guidance Materials https://t.co/NrHKzg16ML
3 hours ago
@FTA_DOT Makes Emergency Funding Available for #Coronavirus Needs https://t.co/3j7xg4ITu9
1 week ago
@OnScaleInc OnScale is Providing Free Cloud Core-Hours to Customers to Mitigate Engineering Productivity Loss Relat… https://t.co/2kznD1Kh0d
2 weeks ago
You can also visit our website (https://t.co/5ChDhKH2IT) to verify the latest conference cancellations and postpone… https://t.co/DhAiikvEtB
2 weeks ago
With limitations on travel and working from home becoming mandated across the country and globe, please feel free t… https://t.co/OTQosM2hWP
2 weeks ago
it will be “business as almost usual” here at Informed Infrastructure. All of the contact information you find in t… https://t.co/osIMDhV6bP
2 weeks ago
STAY SAFE OUT THERE: In these trying times, we aim to be a vital resource for our readers and the engineering commu… https://t.co/qFrDnwEbKv
2 weeks ago
@aisc Cancels 2020 #NASCC: The Steel Conference Due to Coronavirus Threat https://t.co/Dd0Nv4nRxI
2 weeks ago
Structural Engineers Foundation Fred Haas Scholarship https://t.co/UDaFz3eW9N @SEAOIYEC
1 month ago
The Washington State Department of Ecology has recently found that Bio Clean’s WetlandMod®, a horizontal flow biofi… https://t.co/YDd90gMra5
1 month ago