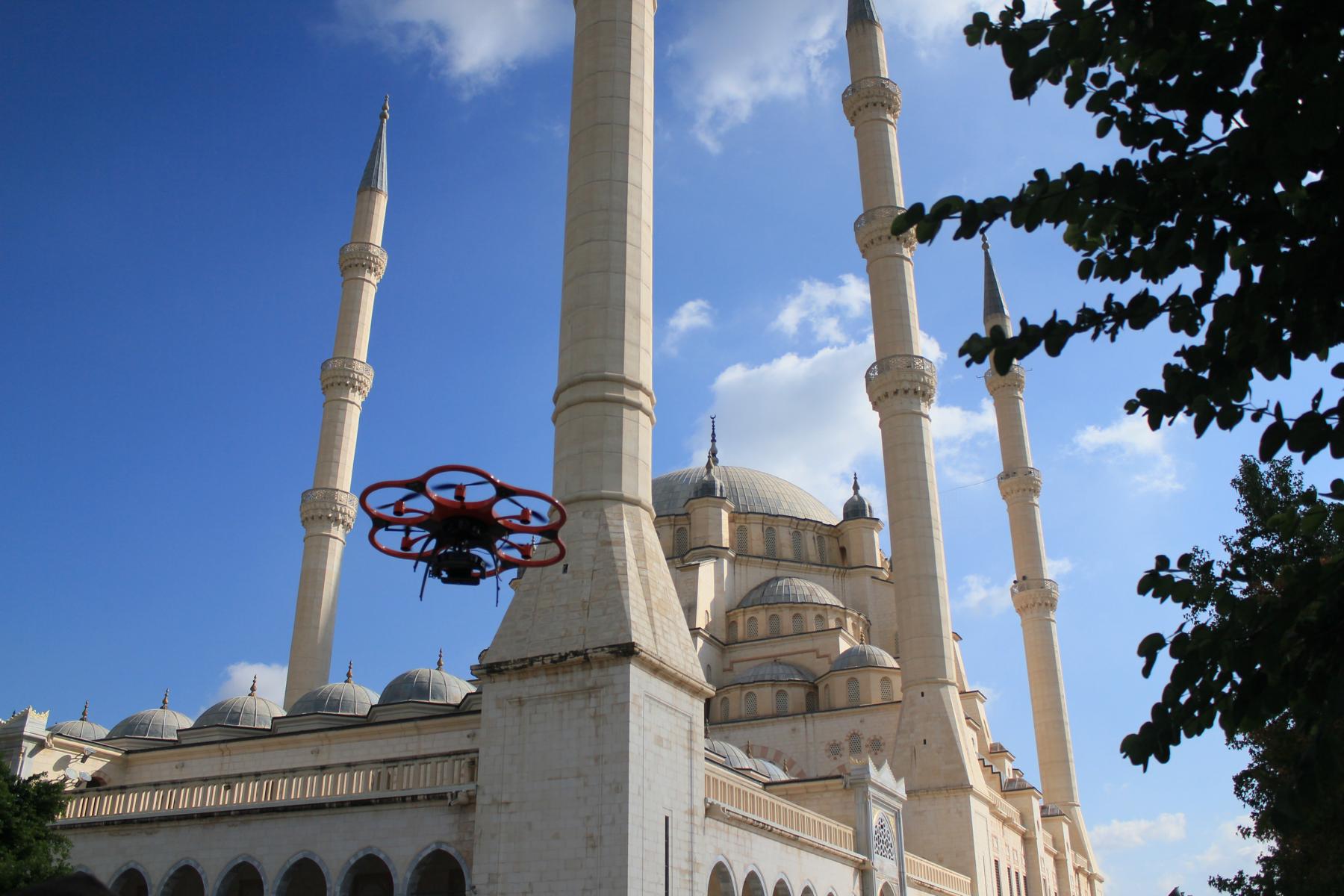 The largest mosque in Turkey has six minarets, four of them are 99 meters high. The largest of its five domes is 32 metres in diameter and 54 metres high, so all in all the determination of the actual state of the impressive building using conventional methods is time consuming and costly. The authorities therefore commissioned an inspection of Sabancı Merkez Mosque by UAV. “We needed only three flights to cover all relevant areas and generate comprehensive data,” explains SISTEM A.S. employee Bora Yavuz, who has been working with terrestrial laser scanning systems for the past five years. “Compared to laser scanning, collecting the data from the top sections of this huge building by UAV was extremely easy, since nobody had to climb up to the minarets or dangerous places on the domes and wait for the machine to scan. Furthermore, alongside the data registration the generation of point clouds runs automatically.”

During the flight over the roof of the mosque the UAV followed a defined route that had been planned on the computer beforehand. The pilot then steered the UAV manually in two more flights around the building. The Aibot X6 was carrying a Nikon Coolpix A digital camera and created high-resolution photos with an 80 percent overlap. Using live images from the UAV’s perspective that were sent directly to the screen of a ground station, the pilot could make sure that all relevant areas were captured, and achieve the best possible results by adjusting the camera to the optimum angle during the flight.

The data was subsequently processed to create an accurate 3D model of the mosque with a precision down to 1 – 2 cm. The high-resolution photos are linked to the model so that damage can be located accurately. The images and the model will now be used as basis for maintenance and repairs.

Synchronization of the GPS information with the images shot by Aerial Image Manager for a fast post-processing.

Aibotix develops and manufactures high quality and intelligent multicopters for applications in the industrial sector. The company’s name is a combination of AI for artificial intelligence and BOTIX for robotics. Aibotix is represented around the globe. The company produces several hundred UAVs annually, making it one of the five largest manufacturers in the world. Thanks to a global network of partners, Aibotix provides customers worldwide with the opportunity to test and purchase its products as well as with personal advice and support. Aibotix GmbH is part of Hexagon, Sweden.