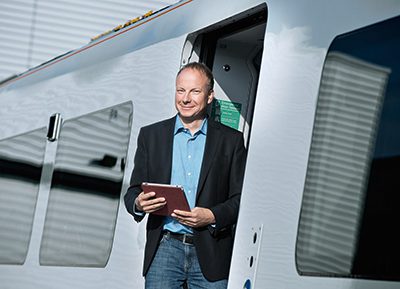 Ralf Beyer and Peter Faubel are two of the twelve employees who have won the Siemens “Inventor of the Year 2014” award. Both are active in the field of railway technology and together have over 90 patents to their credit. Their clever ideas have spawned products that make the web-based maintenance of rail vehicles possible or which use wireless communication to optimize the power consumption of classification yards.

When it comes to maintaining rail vehicles, technicians have to deal with as many as 200 interlinked control devices from different manufacturers. Until now, technicians have had to carry up to 20 different cables on their maintenance assignments and have about 60 various software programs installed on their notebooks. Ralf Beyer, system architect at the Mobility Division in Erlangen, Germany, wanted to alleviate this situation with the aid of a web-based service for rail vehicles.

Ralf Beyer has now invented a web-based service for rail vehicles – a kind of virtual “drill”.

It was Beyer’s idea to import the software directly into the components of the vehicle control system. This eliminates the need for all those cables because it enables technicians to work with any web-capable mobile terminals to virtually “get inside” the individual components of the control system and take the diagnostics drill-down approach to get to the source of the problem – wirelessly and with only one program. This web-based service will be employed for the first time in the British Desiro City “Thameslink” fleets, in the new ICx high-speed trains for Deutsche Bahn (DB), and in the Desiro ÖBB multiple units for Austrian Federal Railways (ÖBB).

The inventor intended not only to make work more efficient for the technicians, but also to improve service for the drivers. For example, as soon as a problem occurs on board the vehicle, the driver is informed and instructed how to react to it by means of a user interface that was newly designed by Beyer.

Constant monitoring of switching operations in classification yards is necessary in order to know which trains are standing where and how many there are. Every freight train has a characteristic profile that is based on the number and spacing of the axles of its cars. Wheel detectors arranged in the tracks of the yard allow trains to be identified relatively easily. Peter Faubel developed these devices even further to enable them to communicate the measured data of the passing trains wirelessly. The detectors register when a wheel passes over them. Based on the time interval between the first and the second contact, the inbuilt processor determines directly at the track whether the train has come from the left or right, how many axles and cars it has, and – derived from the axle spacing – what types of car are in the train formation.

Peter Faubel has modified wheel sensors in a manner that enables them to
wirelessly transmit data on rail-car positions as trains pass over them.
The devices are equipped with a battery or a solar panel and accumulator to supply power for the radio link and the wheel detectors. Owing to the extremely low power consumption of the new system, the devices can remain in operation for many years without needing any maintenance. The previously required and expensive cabling of the detectors has been eliminated. The new device is currently undergoing testing in the tracks at the Port of Karlsruhe on the Rhine, Germany.

Innovations safeguard the technological future and success of the company

Since 1995, Siemens has been presenting its annual “Inventor of the Year” award to outstanding researchers and developers whose inventions make a major contribution to the success of the company. Compared to the previous year, the number of Siemens patents in 2014 rose by ten percent to around 64,500 – also thanks to the twelve winners of the “Inventor of the Year 2014” award and their combined total of 900 inventions and 842 individual patent grants.