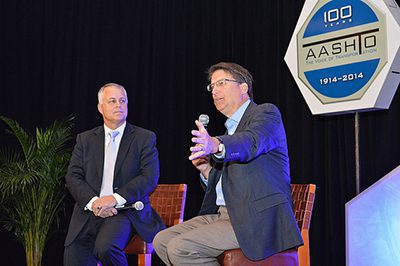 North Carolina Gov. Pat McCrory gave AASHTO members at the annual meeting some first-hand lessons in the value of long-term transportation planning and backing it up with revenue to improve economic development.

He urged transportation officials from throughout the country to spell out the harm that would come from lack of transportation investment in their states as well as a vision for how to improve their networks.

McCrory, a former mayor of host city Charlotte, said he and a few other officials long ago drew up a 25-year transportation plan on a napkin – a plan that included an inner-city light rail line along with transportation arteries coming out of the city and an outer beltway highway. “Now we’re in the 19th year” of that original plan, he said.

At the time, McCrory said, many doubted he could get a light rail line connecting many of the downtown’s important businesses and hotels. He told meeting participants that both the Westin Hotel where the meeting was held and the large convention center next door were planned with the intent to put that light rail line to them. Now that light rail system exists and connects nearby to the area bus hub, and there are plans to expand the rail component.

But he said a crucial part was the voters’ decision in 1998 to approve a major transportation funding measure to support that vision, which is still providing the revenue for infrastructure.

In statewide office, McCrory said he was struck with finding that many widened sections of the road network were named for public officials who helped get those pieces funded. But he said infrastructure should not be funded on the basis of local influence, but on the broader need of the economy and to better connect the broader transportation system.

“I could care less about political boundaries of cities and counties, because economic development does not recognize those,” he said. Instead, McCrory said he and North Carolina Transportation Secretary Anthony Tata are trying to open up the bottlenecks such as where highways narrow to fewer lanes, and improve connectivity with seaports or other parts of the larger system.

In addressing the AASHTO mission, McCrory told of a friend who was ill who said: “You can wait for the pain to arrive and do something then, but probably it will be too late.”

McCrory noted the other option: “Or you can anticipate the pain and change now, but it’s going to be a heck of a sale, because the pain hasn’t arrived yet. And I think that relates to transportation. We have got to look 10 to 20 to 30 to 40 years down the road to anticipate what’s coming forward rather than reacting. Because once you react I think you’ve lost the game.”

He said that’s what they did when he was Charlotte mayor and are now trying to do at the state level.  North Carolina, he said, is trying to “anticipate the pain, and prepare for it, and beat it, as opposed to reacting. The dilemma we all have: It’s a hard sell, because if people don’t feel pain they won’t feel like they need to invest in it quite now. And that’s our great challenge.”