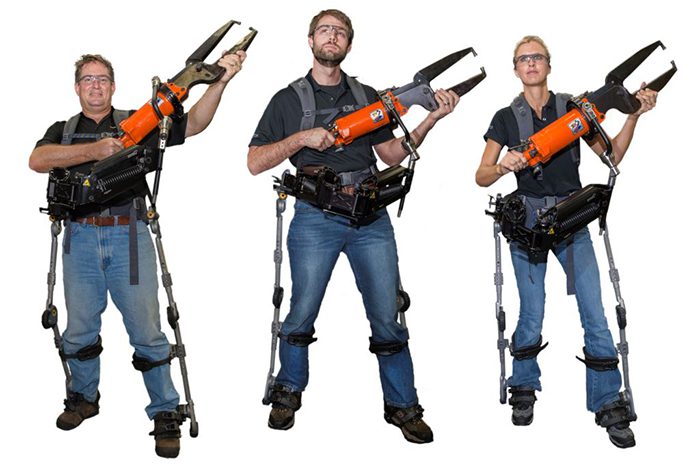 For something as seemingly easy as holding your arms outstretched, imagine how much more difficult it would be if in your hands were a 30-pound sandblaster. Thirty pounds doesn’t sound like much, but consider that it is roughly the weight of an average toddler, four one-gallon jugs of milk or six laptops. Odds are you wouldn’t be able to hold the weight for long before needing to rest.

This is a common scenario in the industrial sector where workers must use heavy, hand-operated tools to complete their tasks. Whether grinding barnacles off a ship’s hull or welding a long section of beam, daily industrial work can be physically exhausting. That’s where exoskeleton technology comes in.

“Exoskeletons can enhance a person’s physical capabilities,” said Patricia Aelker, program manager of Lockheed Martin’s exoskeleton technologies. “To increase strength or endurance, you must have a keen understanding about the structure of the human body, the science of how the body moves and the variations among individuals.”

Using that information, as well as lessons from previous proof-of-concept designs, the team developed the FORTIS™ exoskeleton, which comfortably accommodates multiple body types while increasing endurance and productivity.

The FORTIS exoskeleton takes the weight of a load, like a heavy hand tool, off operators, making it easier for them to do their work. Using the principles of biomechanics, the weight is transferred to a mechanical arm and down to the ground through a series of joints, similar to the joints in your hips, knees and ankles.

Meaning strength and endurance in Latin, the FORTIS exoskeleton makes the difference between holding a tool and managing a tool.

“When you hold a tool, you’re not only carrying its weight but also enduring the impact of using it,” Aelker said. “When wearing the FORTIS exoskeleton, a user only needs to guide the tool to the location where it should be used. It feels like you’re using the tool in an almost weightless environment.”

Reducing the load and impact from operators translates into productivity gains. Whether measuring how much more a worker could weld before resting or the percentage increase of sandblasting that could occur in an allotted time, Lockheed Martin’s FORTIS exoskeleton demonstrates productivity increases of two to 27 times.

Exoskeletons are changing the way we look at performing certain jobs,” said Keith Maxwell, Lockheed Martinexoskeleton technologies capture manager. “By introducing exoskeletons to the industrial environment, we’re opening the aperture for where they can be used and how they can enable workers to be more productive with less fatigue or strain.”

The FORTIS exoskeleton can be used in a typical factory setting and also in complex environments, such as maintenance and repair, where work areas are confined and not always conducive to efficiently completing the task.

“Because the FORTIS exoskeleton is lightweight and mobile, a tool operator could easily wear it while making repairs or performing maintenance in areas that weren’t designed for stationary, bench-mounted tools, like in a ship’s engine compartment or the fuselage of an aircraft,” Maxwell said.

As a result, the applications for exoskeletons of this type are wide-ranging. From ship and aircraft repair and maintenance to mining and emergency response, Lockheed Martin’s exoskeleton technologies team continues to tailor the capabilities of the system to customers’ needs.

“Developing exoskeletons is challenging, but that challenge drives us,” Aelker said. “We’re focused on advancing exoskeleton technology to make the daily grind a little easier.”