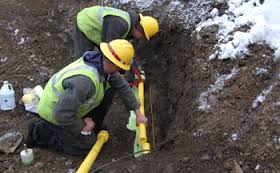 The app replaces the 8,000 annually printed maps previously used to inspect and maintain pipeline and investigate problems as part of a mandated annual leak survey.

“Converting from a paper solution to digital data collection will reduce manual errors [and] increase efficiency with regulatory compliance, and is expected to increase the trust relationship with auditors,” Avista project manager Emmet Skaar said.

The app works in conjunction with several office map viewers, such as a dispatch and a correction viewer, configured with Esri’s ArcGIS Viewer for Flex. Supervisors view the data in near real time.

The instant visibility of field data lets supervisors respond immediately to situations such as identified leaks or surveyors having trouble entering a location. The supervisors can also assign and monitor work orders from the office.

“This will lower our audit risk, as paper forms can be time-consuming to search through or simply filed out of order,” Skaar said.

The proactive move to comply with annual leak-survey regulations also shaves weeks off Avista’s response time, thanks to personnel no longer being needed to input the paper survey records.

“Errors in the field-collection process can be caught and corrected in near real time by the vendor,” Skaar said, “instead of two to four weeks later, when corrections are significantly more difficult to achieve and require Avista personnel to accomplish.”

Avista has been using Esri desktop technology for 15 years. This year marks the utility’s 125th anniversary in energy production, transmission, and distribution.

Learn more about Esri technology for gas utilities at esri.com/gas.