Shibanee and Kamal Architects, principal architects of Bangalore-based Total Environment Building Systems Pvt Ltd, designed the BHAU Institute of Innovation, Entrepreneurship, and Leadership (BIEL) for the College of Engineering, Pune. Located on the bank of river Mula in Maharashtra, India, the Institute is intended to nurture innovation, encourage entrepreneurship, and develop leadership. The INR 60 million building provides educational and research space within an unconventional, bi-directionally curved structure that blends in visually with the college’s 160-year-old campus. The structural engineers used Bentley’s STAAD.Pro to deliver the precise analysis and visualization that enabled the evaluation of the curved wall itself as a load-bearing element. This substantially reduced the cost of the entire project.

Chartered in 1854, the College of Engineering, Pune is consistently ranked among the top 20 technical colleges in India. The college’s newest institute will help students cultivate entrepreneurship qualities and support them while they set up new companies. The architects kept this mission in mind as they conceived a space that would integrate physical, social, and environmental considerations for a business incubator. The building had to fit on a site bounded on three sides by existing buildings, as well as blend organically into a campus declared to be one of the protected heritage structures in India. Perhaps the single greatest challenge, however, was to preserve a mature tamarind tree, which became the nexus of the design.

“When the architect turns innovative, a structural engineer cannot lag behind. So we, too, responded positively by being innovative. Our engineers have mastered the art of modeling any complicated structure in STAAD.Pro. In this building, the main challenge before us was to employ the curved walls to support the slabs, and exploit their in-plane strength to resist seismic shears effectively. We could achieve whatever architects wanted and imagined.”

Shibanee and Kamal conceived a circular space built-up around the tree and spreading over a ground floor plus two floors for classrooms, incubation rooms, auditorium, conference facilities, and faculty rooms. The circular shape of the building not only preserved the mature tamarind tree but also fulfilled the requirements for good circulation space for the classrooms and auditorium. A bridge connecting the two ends of the building on either side of the tree made sure that not a single branch of the tree had to be cut.

The roof slab of the building was partly converted into a landscaped terrace garden, helping to integrate the building with its historic surroundings. A viewing gallery and amphitheater intended for recreation and relaxation overlook the river Mula, which flows along the northern side of the building. This alignment ensured that each habitable space has natural, glare-free north light and ventilation. In addition, the curvilinear change in elevation provided the maximum road width at the ground level, where the site was tightly constrained on three sides. 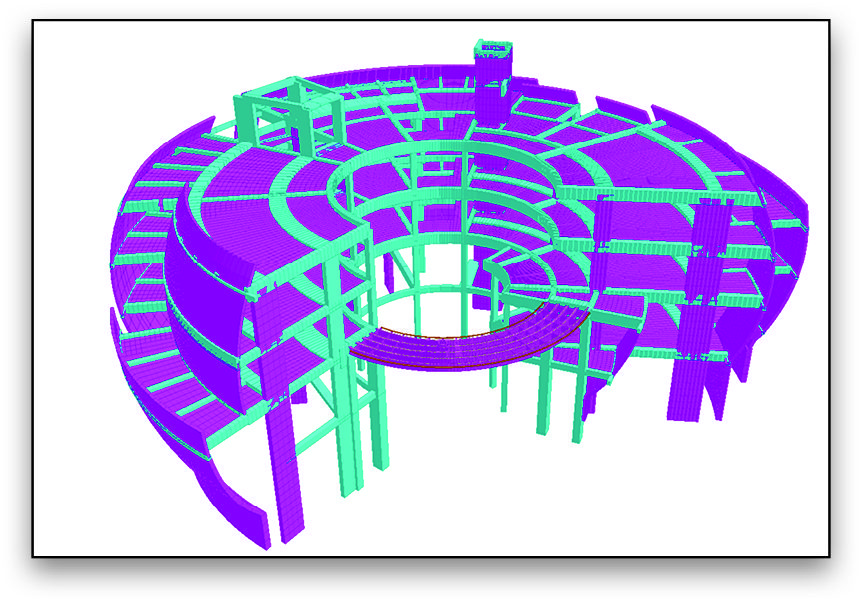 The complex curved wall structural model was rendered and analyzed in 3D with Bentley Systems’ STAAD.Pro.

The architects’ design dictated that concrete walls were essential to support brick cladding on the exteriors and also to provide concrete form finish on the interiors. The main challenge for the structural engineers was to employ and exploit these walls to support gravity and lateral forces. First, the engineers had to answer numerous questions: Can bi-directionally curved walls of restricted thickness support slabs without excessive deflection? Can the structure resist the high seismic forces expected in this locality? Can large openings be made in the curved walls without compromising structural integrity? What about placing a curved wall on a set of beams that, in turn, rests on another curved wall?

The complexity of the BIEL building, which covered a built-up plan area of 2,128 square meters, demanded highly accurate modeling. STAAD.Pro was found to be the most versatile software for modeling and analyzing this structure, because of its flexible modeling environment, advanced features, powerful text editor, and interoperability. The Bentley software enabled the engineers to perform comprehensive and integrated finite element analysis, including analyzing for static loading; dynamic response; soil-structure interaction; and wind, earthquake, and moving loads.

STAAD.Pro allowed walls to be modeled as plate elements, and because of the software’s hybrid formulation, it could simulate the behavior of both thick and thin plates. It also allowed the engineers to model openings within the walls. The engineers were able to perform both static and dynamic analysis to understand the behavior of the structure, including the steel bridge under different loading conditions. STAAD.Pro also helped the engineers design the walls using its innovative cut-line method, where the software outputs the design forces along a user-define cut line.

The 3D structural model was prepared easily by importing the vertical curved profile of the wall from AutoCAD into STAAD.Pro and then using the extrude, mirror, and copy features to model the curved wall.

The BIEL building is one of the rare structures where bi-directionally curved walls support slabs and beams, and the same beams and slabs prevent the wall from falling away.

The unconventional structure challenged the firm’s engineers to analyze and design for all the expected load combinations, satisfying the limit states of safety and serviceability. It was essential to understand the exact behavior of the structure before designing the structural elements. STAAD.Pro helped the engineers to achieve this understanding.

The unconventional design of the BIEL building may appear to be extravagant. But a more conventional design alternative that involved the use of cantilevers was, in fact, uneconomical and certainly less aesthetic. The architects chose the more challenging design and made it work. Consideration of the curved wall as a load bearing element (both gravity and seismic) ultimately resulted in substantial cost savings.

Major cost benefits during the design phase were realized through effective coordination among the architectural and service teams. This was due to the 3D visualization of the frame, the flexibility of the structural analysis, and the reliability of the results delivered by STAAD.Pro.

Designed to create an excellent ambience for innovation and learning, the BIEL building fits within the context of the campus’ protected heritage. The scale of the structure and usage of materials do not disturb the existing skyline in the vicinity, and yet the new building has its own identity. Shibanee and Kamal Architects made every effort, from design through construction, to protect the prized tamarind tree. With this tree as its focal point, the building blends in with its surroundings through the application of natural cladding materials and terrace gardens.