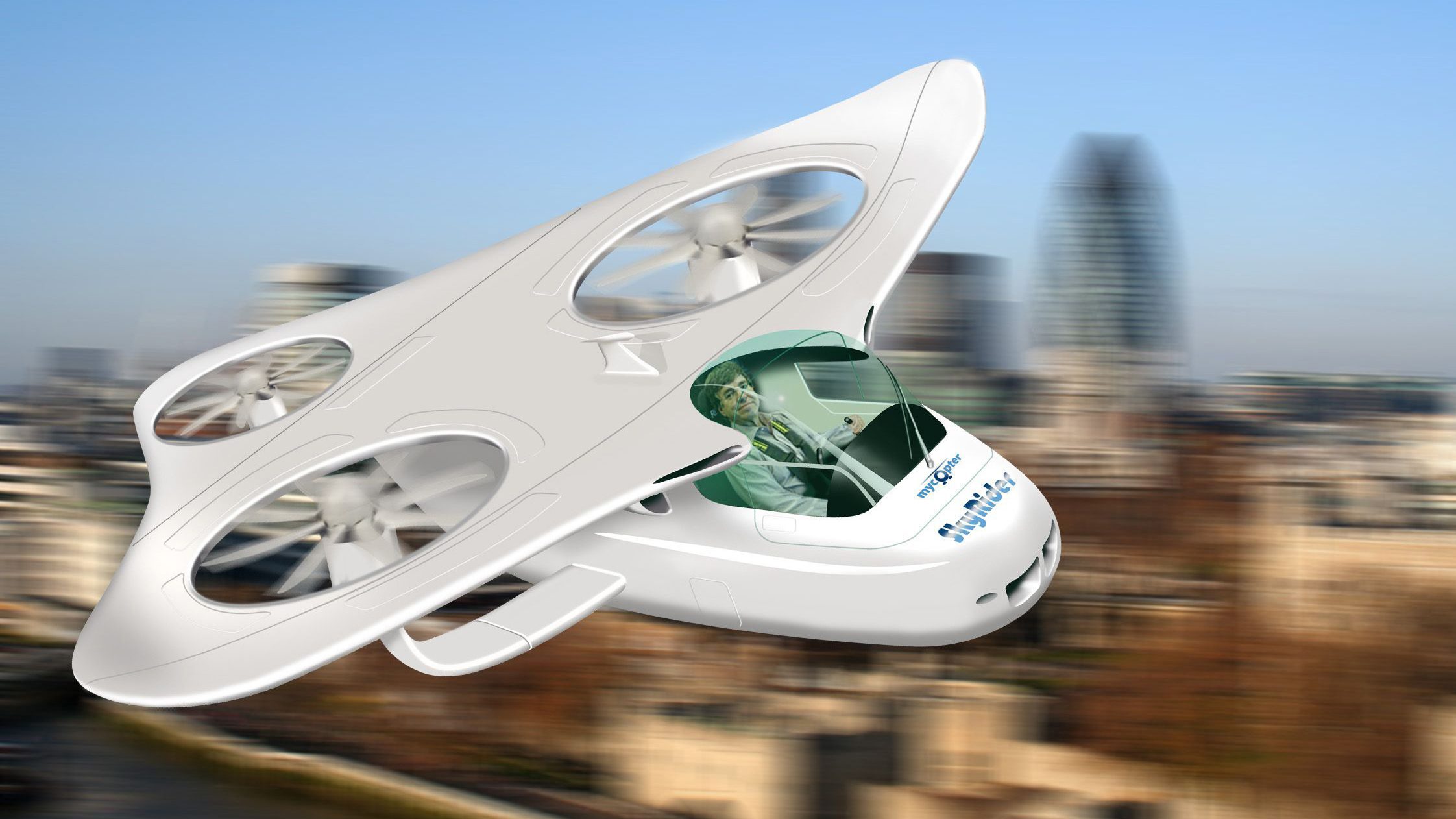 Road congestion is a fact of everyday life for many people. A possible solution for the future is expanding personal transport to include aviation. High above the roads, the routes become much more flexible, and travellers can reach their destinations faster. Researchers at the of the German Aerospace Center (Deutsches Zentrum für Luft- und Raumfahrt; DLR) Braunschweig site recently presented the results of the EU research project myCopter.

The DLR-developed myCopter steering wheel system, which allows users to operate tomorrow’s aerial vehicles almost like cars, is the highlight of the development. Numerous other questions such as collision prevention, swarm flight or pilot training were analysed within the framework of the project, conducted under the auspices of the Max Planck Institute for Biological Cybernetics. The project also sought to learn more about the opportunities and challenges of an accessible personal air transport system, as well as take into consideration the expectations of the potential users. With an initial investigation of the possible social impact of the project, myCopter provides additional pioneering work in the field of future personal air transport systems.

The researchers focused on fundamental technologies and concepts. In future, the plan is that special aircraft, known as Personal Aerial Vehicles (PAVs), will enable people to go where they need to go by air. But for this to happen, the pilots will need a more efficient and intuitively designed control system. One of the greatest challenges is engineering a control system that enables anyone to fly future PAVs. At the moment, the control systems found in modern helicopters are complex and using them requires a great deal of training,” says Stefan Levedag, Head of the DLR Institute of Flight Systems. “But we have now managed to develop a steering wheel based control system – with automatic control technology behind it – that makes flying far simpler. The range of possible applications extends way beyond PAVs, bringing clear benefits to other airborne vehicles as well.” Special control technology assists pilots while manoeuvring the aircraft.

Drivers are perfectly familiar with how to steer a car. The plan is to use this wealth of experience to create a more intuitive system for aircraft control with the aim of substantially simplifying the training required for future PAV pilots. “Personal Aerial Vehicles have the potential for playing an important role in future transport systems,” emphasises Heinrich H. Bülthoff, the Project Manager from the Max Planck Institute for Biological Cybernetics. “myCopter has made a substantial contribution to developing crucial technologies that will be needed in future to make the dream of PAVs come true.”

Steering wheel in the helicopter simulator

‘Take four and make three’ was the underlying concept behind the new steering wheel for helicopters. “Until now, helicopter pilots have been required to monitor all four control axes,” explains Bianca Schuchardt from the DLR Institute of Flight Systems. “This takes absolute concentration, especially when hovering, as a pilot must operate both sticks and pedals at the same time to maintain a stable position in the air.” The cyclic stick – responsible for movements about the longitudinal axis (roll) and the transverse axis (pitch) – is missing from the myCopter steering wheel system. “Instead, the pilot simply turns the steering wheel as required to fly the helicopter in the intended direction,” Schuchardt continues. One stick remains, exclusively responsible for altitude. Alternatively, this aspect could be controlled using a paddle fitted to the steering wheel. Just as with the accelerator and brake in a car, the pedals control speed and can even cause the vehicle to hover. An eight-way switch on the myCopter steering wheel controls reverse and lateral flight. The steering wheel has already completed its maiden flight in the virtual environment of the Air Vehicle Simulator (AVES) operated by DLR in Braunschweig. The next stage will involve actual flight-testing of the system using the DLR ACT/FHS research helicopter, which is based on aEurocopter EC 135.

Out of the tailback and into swarm flight

“The key to simplifying helicopter flight for everyday purposes and – in addition to the controls themselves – to introduce suitable sensors and screen content that make piloting the aircraft as intuitive as possible for the user,” says Bülthoff, who conducts research into these questions at the Max Planck Institute for Biological Cybernetics. Other project partners are involved in questions of how the numerous individual pilots could be coordinated and what specific PAV training they would require. The aerodynamic PAV model and the curriculum for training future pilots was also a topic at the University of Liverpool. Meanwhile, students at École Polytechnique Féderale de Lausanne (EFPL) used unmanned aerial vehicles to conduct research into collision prevention, swarm flight and automatic landing site detection, while the Swiss Federal Institute of Technology in Zurich(Eidgenössische Technische Hochschule Zürich; ETH Zurich) investigated control strategies for personal aircraft and also used unmanned aerial vehicles to test take-off, landing and navigation. The Karlsruhe Institute of Technology (KIT) analysed the socio-technological aspects of the project and how the introduction of PAVs would affect society.

DLR has also used its EC 135 ACT/FHS research helicopter to conduct demonstrations of selected technologies developed within the framework of the project. “We are supporting the development of aerodynamic models and producing a ‘Highway-In-The-Sky display’ for PAVs – a kind of intuitive navigational tool for the pilots,” explains Schuchardt. A tunnel display in the cockpit shows lines indicating the optimal flight path to the pilot.

The myCopter project – Enabling Technologies for Personal Aerial Transportation Systems – is scheduled to last four years, running from the start of 2011 to the end of 2014. It receives funding from the European Commission within the 7th Research Framework Programme. Partners include the Max Planck Institute for Biological Cybernetics (project management), the University of Liverpool, EFPL, ETH Zurich, KIT and DLR.