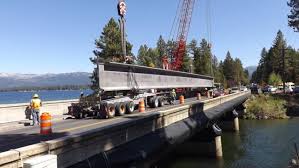 BOISE, Nov. 20, 2015—The new Lardo Bridge over North Fork Payette River at the outlet to Payette Lake in McCall will open on Wednesday (Nov. 26), the Idaho Transportation Department announced.

The new Idaho 55 bridge features a variety of colors, textures and architecture reflecting a “celebration of water.”  The centerpiece of the bridge is a 400 square-foot viewing platform jutting out over the water on the north side of the bridge, giving pedestrians a clear view of Payette Lake and the mountains beyond.

The Lardo Bridge is the first new bridge to be built by ITD using the lateral slide construction method, which reduced a full closure of the bridge by months. In September, six 157-foot girders for the new bridge, weighing 197,000 lbs. apiece, were set on a temporary structure. Crews then drove permanent piles, installed rebar and constructed the bridge deck and overhangs, and removed the old bridge.

The new bridge was placed on slider pads lubricated with dish soap to facilitate horizontal movement. The new bridge was then slid over the pads a few inches at a time. Once the bridge is open, crews will complete grout and patch work.

This new bridge replaces the 83-year old Lardo Bridge on the southwest shore of Payette Lake. Ralph L. Wadsworth (RLW) and Lochner used ITD’s conceptual design to complete the bridge design and build a new bridge that accommodates one lane of traffic in each direction along with bicycle and pedestrian facilities on each side of the bridge.