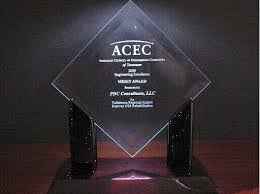 Honor Awards were granted to 11 firms and five firms received the Merit Award with two firms receiving awards in the small firms division. An awards dinner will be held in Sacramento, January 15, and Honor Award winning projects will have photographic panels on display at the Capitol, outside of the Governor’s office, in early 2015.

“Every day these firms work in collaboration with public and private sectors, state and local agencies to help build California better,” said ACEC California Executive Director Brad Diede. “It is with great accolade that we honor their work.”

Honor Awards were granted to the following firms:

Merit Awards were given to:

ACEC California is a statewide association representing more than 800 private consulting engineering and land-surveying firms that average 20 employees each.  ACEC California is dedicated to enhancing the consulting engineering and land surveying professions, protecting the general public and promoting the use of the private sector in the growth and development of our state. Our members provide services for all phases of planning, designing and constructing projects. For more information, visit www.acec-ca.org.