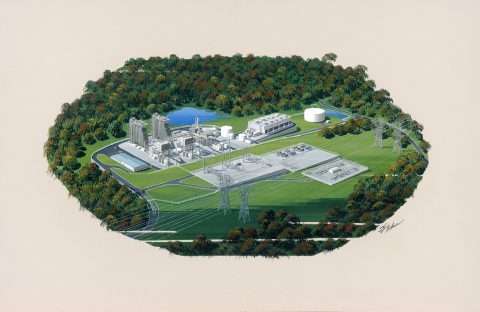 Panda Power Funds has successfully financed its 778 MW combined-cycle power plant located in an industrial-zoned area of Loudoun County, Virginia. When commissioned, the natural gas-fueled Panda Stonewall generating station will be able to supply the power needs of approximately 778,000 homes in the Northern Virginia/District of Columbia metropolitan area. Panda will immediately begin construction on the 101-acre site and expects the facility to enter commercial operations during the spring of 2017.

The transaction marks the sixth financing of a large scale power facility by Panda Power Funds in the last three years, representing approximately $5 billion in total combined capital. The fund is supplying equity for the Stonewall project along with large institutional co-investors, including Siemens Financial Services.

“The United States is in the early stages of an energy revolution away from coal toward clean natural gas. Three years ago, Panda Power Funds set out to help drive that revolution by building the cleanest, most efficient fleet of natural gas-fueled power plants in the nation,” said Todd W. Carter, president and senior partner of Panda Power Funds. “The financing of the Stonewall plant is an important step forward in achieving that vision. Today, we have eight power projects — four are under construction, three are in operation and one is in advanced development. And we’re just getting started.”

The Panda Stonewall facility has been strategically sited approximately 4 miles southeast of Leesburg, Virginia, in one of the fastest growing counties in the United States. According to the U.S. Census Bureau, Loudoun County’s population grew by approximately 84 percent between the census of 2000 and 2010. The region is also home to the Dulles Technology Corridor, a national hub for data storage, defense and technology companies. Approximately 70 percent of the world’s Internet traffic flows through Loudoun County. At present, the county imports 100 percent of its power needs from neighboring areas.

The Panda Stonewall plant has been purposefully designed to minimize impacts to the local community. The state-of-the-art facility will utilize the latest, most advanced emissions-control technology, making it one of the cleanest, most efficient natural gas-fueled power plants in the United States. The generating station will exclusively use pipeline quality natural gas to reduce particulate matter and air emissions.

The generating station will also use reclaimed municipal waste water from the Town of Leesburg to cool the plant, conserving the Commonwealth’s natural supply of drinking water. Putting to use waste water that would normally be diverted to the Potomac River subsequently prevents the discharge of harmful nutrients into the environmentally sensitive Chesapeake Bay watershed. Additionally, the Stonewall plant will be a “zero-liquid-discharge” power plant, returning no waste water to a treatment facility.

The plant’s location is well screened by a naturally wooded area to reduce sightlines. The facility will also be built along existing transmission lines, eliminating the need for additional power lines that would otherwise be required to import power from outside of Loudoun County.

The Stonewall generating station is expected to have a very positive impact on the area’s economy during construction and the life of the facility. The plant will generate an estimated $20 million per year in direct and indirect spending, and increase the tax base in Loudoun County and the Commonwealth — providing several million dollars per year in property and sales taxes. The Panda Stonewall plant will also generate considerable annual revenue to the Town of Leesburg for the purchase of wastewater.

Approximately 600 jobs will be created to construct the power plant at peak construction. During operations, the generating station will create approximately 30 high-paying, long-term jobs.

Panda Power Funds acquired a majority stake in the Stonewall project from GEP/S Holdings LLC, the project’s original developer, and Bechtel in May 2013. GEP/S Holdings began work on the Stonewall project in late 2008 and began holding public town hall meetings and community engagement events in March 2009. The project received its air permit from the Virginia Department of Environmental Quality in April 2013 and its Certificate of Public Convenience and Necessity (CPCN) in May 2014.

Panda Power Funds selected a turn-key consortium of Bechtel and Siemens Energy Inc. to build the Stonewall facility. The firms are two of the largest power contractors and technology providers in the world.

As a part of the contract, Siemens will provide the power island package including the natural gas turbines, steam turbine, generators, heat recovery steam generators, and instrumentation and controls systems. The turbines for the Stonewall generating station will be manufactured at Siemens’ manufacturing facility in Charlotte, North Carolina.

Bechtel will be responsible for the engineering and procurement for the balance of the plant, and the installation, construction and commissioning of the facility. Panda began pre-construction site work in early July. Construction will take approximately 30 months.

Founded in 2010, Panda Power Funds is a private equity firm headquartered in Dallas, Texas, which has the ability to develop, acquire, construct, finance and operate large-scale, natural gas-fueled power generation facilities. Panda has two combined-cycle power plants in operation in Temple and Sherman, Texas, and four combined-cycle power plants currently under construction in Texas, Pennsylvania and Virginia with a combined capacity of more than 4,700 megawatts. Panda Power Funds also has an 859 megawatt power project in Southern Maryland in advanced development. The fund built a 20 megawatt solar farm in southwest New Jersey that is one of the largest solar facilities in the Northeast United States. Additional information on Panda Power Funds can be found at www.pandafunds.com.

GEP/S Holdings LLC is a Loudoun County-based limited liability company formed in 2009 to develop a natural gas power plant. Daily operations are overseen by Managing Partner John A. Andrews II, an accomplished developer in Loudoun County. The firm believes in giving back to the local community, and Andrews has worked to do that, having been elected twice to the Loudoun County School Board and served as its chairman for two terms. He has also served on numerous community nonprofit boards and currently is the vice chairman for the Blue Ridge Speech and Hearing Center.