Jacksonville Gets to Work on New Bus Rapid Transit System 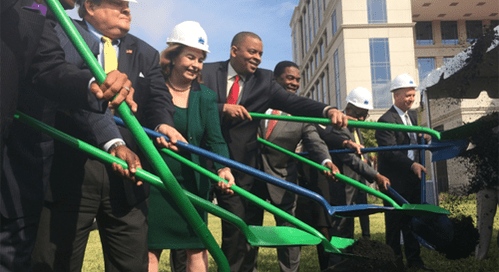 In Jacksonville, Florida –one of our cities hardest hit by the recession– the jobs are beginning to come back, and so are the people to fill them. From 2012 to 2013, the metro area’s population grew at a rate that was nearly twice the national average.

Now, while this is good news, it also presents a challenge: How do you move an increasingly larger population around a city with a limited number of streets?

Today in Jacksonville, drivers are experiencing more and more traffic congestion. The more than 40,000 people who ride the region’s buses are experiencing their share of delays, too.  And for some transit-dependent folks, good connections to the jobs downtown just aren’t available.

But city leaders found a visionary solution: build a Bus-Rapid-Transit system (BRT) with dedicated lanes that will offer riders faster, more frequent, and more reliable trips. And I was thrilled to be in Jacksonville today to celebrate the start of work on the First Coast Flyer because DOT is helping the Jacksonville Transportation Authority (JTA) make that vision a reality.

We’re very proud to be supporting this effort with $9.3 million in federal funding, which is roughly 70 percent of the total project cost.

Of course, this is just part of Jacksonville’s larger vision for transforming their transportation system. Today, they began creating six miles of BRT routes, but the JTA knows the city needs nearly 50 more miles of BRT routes. They envision the $13.4 million invested thus far as a down payment on a system that –by 2019– will serve the entire region, including the lower-income residents in the northeast.

As part of their comprehensive approach, JTA will also redesign its existing bus routes for the first time in 30 years, and city leaders plan to invest $100 million in new road work to keep those who choose to drive moving smoothly and safely to their destinations.

Even in the best of times, realizing a vision like this is difficult. But as things stand now in the world of transportation funding, it’s even harder.

Fast Lane readers know that without a bill that puts transportation funding on solid ground for the long-term, ambitious projects like this that take years of planning are more likely to remain on a blueprint than become part of the map.

And that’s why DOT sent Congress the GROW AMERICA Act, which –among other things– proposes a four-year solution and increases transit funding by 70 percent.  GROW AMERICA even proposes a new program to get BRT projects like Jacksonville’s up and running much faster.

Whether we live in Jacksonville, Florida or Janesville, Wisconsin, no one should have to accept gridlock as part of our daily commute, or have to accept being cut off from the jobs and opportunities of the 21st century economy.

And when investing in infrastructure is once again an area of bipartisan common ground –when we return to the understanding that there’s no such thing as a Republican bridge or a Democratic road, and when we realize that growing America means modernizing American transportation –no one will have to.