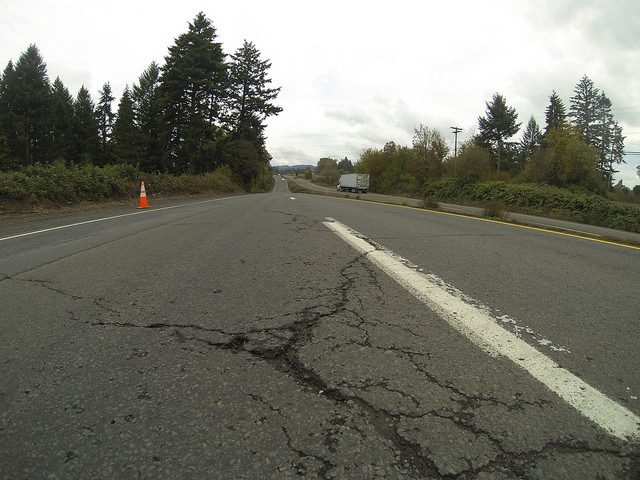 Matt Ball on November 13, 2014 - in Corporate, Maintenance, Roads, Transportation
Two new studies show Oregon can invest in its roads and bridges now to protect economic vitality—or not invest and jeopardize our future
Two new economic analyses of Oregon’s highways, roads and bridges released today demonstrate the important connection between well-maintained, multi-modal transportation choices and Oregon’s economy: Without one, the other falters.
“These studies are a wake-up call,” said ODOT Director Matthew Garrett. “We can take action today to protect our future economy, with reasonable investment. If we don’t pay for maintenance and seismic improvements now, they’ll be prohibitively more costly later, when we may no longer have any choice.”
The two studies are “Rough Roads Ahead: Costs of poor highway conditions to Oregon’s economy,” which explains the undesirable effects of delaying needed highway paving and bridge repairs, and “Oregon Highways Seismic Plus Report,” which explains how a bridge upgrade strategy begun now will save lives and protect jobs and the economy in the aftermath of a major earthquake—and boost the economy even if an earthquake doesn’t occur.
Oregon’s transportation system is in good condition today because of significant investments made by the federal government and the Oregon Legislature over the last decade, mainly through one-time infusions such as the OTIA III State Bridge Program and the federal Recovery Act.
However, growing debt service and other factors will reduce Oregon’s road funds going forward. Oregon will have only a fraction of the money needed to keep aging bridges and pavement in their current condition: Without significant investment, road and bridge conditions will deteriorate.
Oregon’s economy, which relies on exports from farms, forests, and factories, is highly dependent on a strong transportation system. Deteriorating conditions will force ODOT to place weight limits on bridges, forcing lengthy truck detours that will increase transportation costs for Oregon businesses, making them less competitive—and increasing costs for consumers and commuters as well.
The “Rough Roads Ahead” report uses a sophisticated economic modeling tool to predict that slower economic growth due to deteriorating conditions will cause Oregon to forfeit 100,000 jobs by 2035.
The “Seismic Plus Report” shows how a major Cascadia subduction zone earthquake would cause most bridges in western Oregon to collapse or become unusable, making recovery and emergency response difficult. The economic analysis in this study concludes that strengthening key highways could reduce the state’s economic loss after an earthquake by $84 billion, reducing the length of recovery, reducing the likelihood that businesses will leave the state forever and reducing the resulting job losses.
The report explains how strengthening key lifeline routes over the next 50 years by retrofitting bridges and repairing or replacing them when it is more cost-effective will also help reduce the loss of jobs due to deteriorating system condition—even if Oregon avoids a major earthquake.
“The studies are remarkably parallel,” said Garrett. “Even though they’re talking about different scenarios, their conclusions are similar: Pay for needed upkeep now, or pay a lot more later, after our transportation infrastructure fails. Oregon’s future economy rides on decisions we make today about our roads and bridges.”