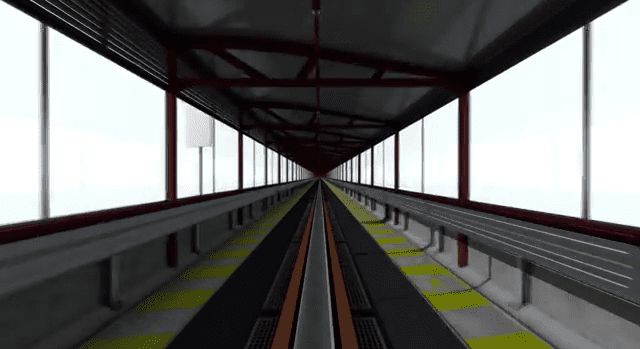 The TEV Project, an open-source transport infrastructure solution designed to meet the global transportation needs of the 21st century, has unveiled a detailed animation to demonstrate the simplicity of the new infrastructure for electric vehicles that could transform how we travel in the future.

The new animation outlines the design of the TEV track and how its modular construction will revolutionise road travel.

Developed by internationally renowned battery expert and innovator Will Jones, TEV is a network of specially designed highway ‘tracks’ that provide direct electric power to EVs as they travel under automated control. This means electric vehicles, robo-taxis, public transport and light freight vehicles will have the ability to travel unlimited miles while being continually powered along the track. A sophisticated computer will take over control of the vehicles as they enter the track, enabling close convoying and high speeds of travel, reducing congestion and travel times while dramatically cutting the risk of accidents.

“Our new animation clearly shows how easily TEV tracks can integrate with pre-existing roads with benefits to motorists, to the environment and to local communities.

“It demonstrates the simple and practical conversion of the two fast lanes of a 6-lane motorway into two lanes of TEV track. Since each of TEV’s high speeds tracks can carry the equivalent of 10 lanes of motorway traffic, the road capacity is not reduced but rather dramatically increased.

“TEV is a very practical transport solution that could future-proof transportation for decades to come.”

TEV public service vehicles have no drivers and circulate around the track as cabs or minibuses. Other vehicles, including private “dualmode” cars enter and leave the track from conventional roads. Vehicles are automatically checked for roadworthiness before being admitted into the TEV network.

TEV is an open-source transport project, open to international collaboration in order to advance the project into a construction phase.

“The future of sustainable and accessible transport lies with large infrastructure projects which can revolutionise the way we travel for the better. By collaborating with private and public organisations, we believe that the TEV Project can make this happen.”

The TEV Project has been invited by the United States Department of Transportation to present at Federal Highway Administration’s (FHWA) Exploratory Advanced Research (EAR) Program workshop early next month (December 2104). The 2-day workshop forms the second phase of a request for information to the EAR Program, which is surveying individuals or organisations conducting relevant research and development into Novel Surface Transportation Systems.

The TEV Project (Tracked Electric Vehicle) is a new transportation infrastructure consisting of an electrically powered track, where electric and hybrid cars can travel indefinitely without the need for charging and without using their batteries.

Electric cars and fleet vehicles will drive on a pre-fabricated, dedicated track under full automatic control. This will allow passengers to travel safely at high speeds which, in turn, will enable vastly greater passenger carrying capacities compared with traditional motorways.

Developed by open-source as a social enterprise, the TEV Project is the vision of Will Jones, a respected inventor, an expert in battery design and founder of Philadelphia Scientific, a leading provider of products and services for industrial batteries and their infrastructure, operating from North America, Europe, Southeast Asia and Asia-Pacific.

Caroline Jones Carrick was born and raised in the USA before moving to the United Kingdom. After more than a decade working in communications for the public sector and construction industry, Caroline co-founded the TEV Project with her father Will.