/ Corporate / Velodyne Meets the Millennials: Sharing the Road – and a Potential Career – with Driverless Cars

Velodyne Meets the Millennials: Sharing the Road – and a Potential Career – with Driverless Cars 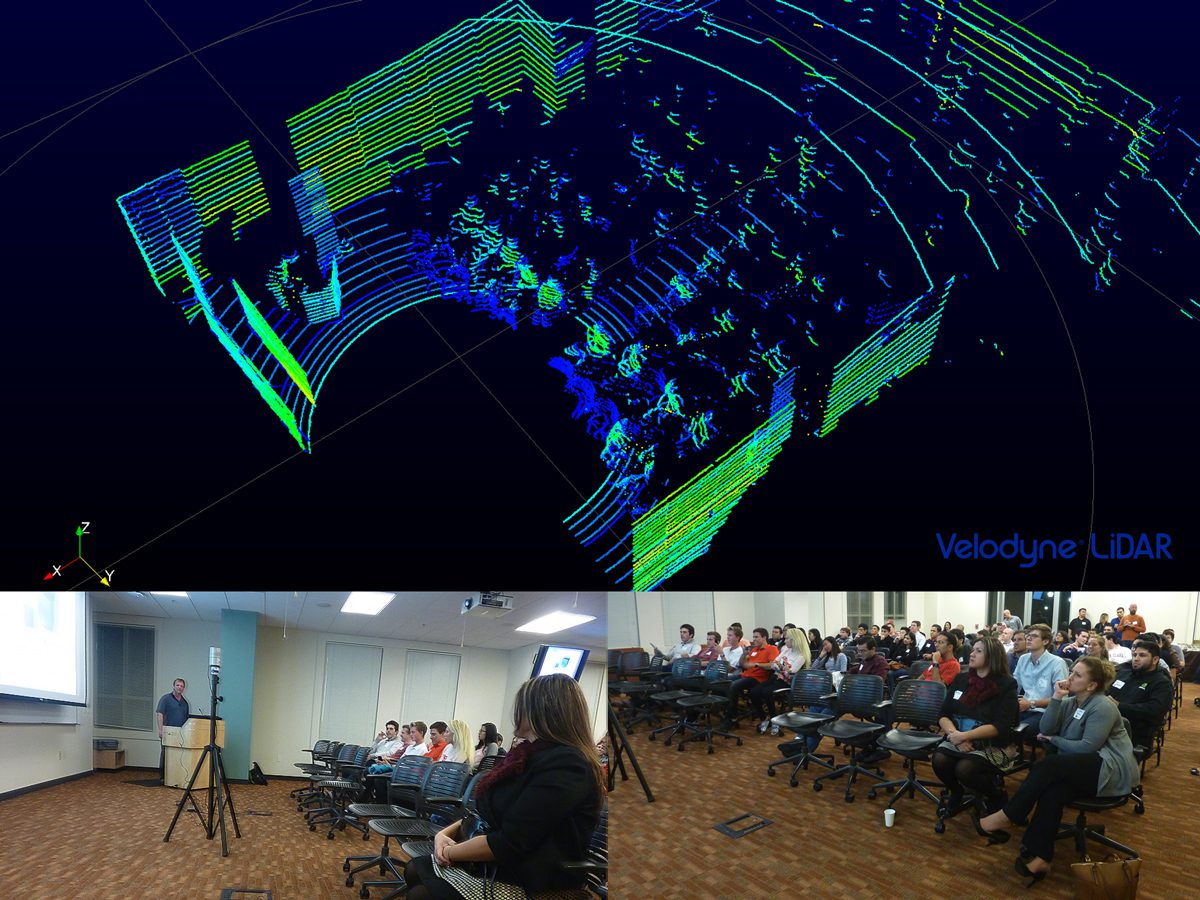 MORGAN HILL, Calif., Nov. 11, 2014—Imagine not having to drive to work. Not because it’s not necessary to get there, or because the subway line is less than a block away. When it’s time to get behind the wheel, the car will take over.

That less-than-completely-fanciful vision came home toSanta Clara University last week, during a gathering of the Silicon Valley Young Professionals organization. As autonomous vehicle technology gathers momentum in the public mind, Velodyne’s LiDAR Division took its story on the road – just up the 101 from Morgan Hill – demonstrating how tomorrow’s vehicles will be able to see, and offering a glimpse of a possible new career path in Silicon Valley.

Those on hand at Santa Clara’s Lucas Hall heard Velodyne LiDAR’s Wolfgang Juchmann and David Oroshnik demystify the company’s latest real-time sensor technology for driverless cars and associated mobile mapping, comparing the five senses of the human body to the various sensors a self-driving car might have. While Velodyne’s real-time, 3D LiDAR sensors are analogous to the car’s two “eyes” and capture the environment in 3D, the sensor has the additional advantage of 360° sight. (That said, it does need to be augmented with a camera to detect the red and green light of a traffic signal.) Velodyne also demonstrated its latest product, the Velodyne LiDAR Puck –- a dramatically smaller, lighter and less expensive sensor that breaks ground at a time when new applications are hitting the market at a brisk pace.

But the evening wasn’t just about the technology. Through a spirited Q&A session, Juchmann and Oroshnik addressed the social, legal and business implications of a world in which drivers sit back and, well, don’t drive. Students were especially eager to learn about what it’s like to work at a technology company like Velodyne, which includes brand name customers Nokia Here Maps, Microsoft Bing Maps, Google’s self-driving cars, and almost every major automaker. The big questions: when will the first self-driving cars arrive in dealer showrooms? How willingly will consumers accept this new class of vehicle? What about liability and insurance – who will be responsible?

“I’ve never seen an audience of students so enamored with a topic,” said H. Buford Barr, Professor of Practice, Leavey School of Business, Santa Clara University, who served as liaison between SVYP and the school. “From the university’s perspective, we appreciated all the effort involved in bringing this remarkable technology to our students. It’s important to have direct communication between Silicon Valley companies at the leading edge of technology. I can’t say enough about Velodyne’s hands-on approach — not only giving a lively presentation but also demonstrating a live sensor and showing the audience what a self-driving car can see.”

Sam Kabert, Chair, Silicon Valley Young Professionals, echoed those sentiments. “We are so appreciative to Velodyne for making this event a success,” he said. “The students were definitely engaged and interested. We probably could have filled an auditorium!”

In addition to students from Santa Clara University, representatives from Mercedes Benz and Audi/Volkswagen joined in the discussion, sharing the manufacturers’ perspective on this emerging market.

Founded in 1983 and based in California’s Silicon Valley, Velodyne Acoustics, Inc. is a diversified technology company known worldwide for its high-performance audio equipment and real-time LiDAR sensors. The company’s LiDAR division evolved after founder and inventor David Hall competed in the 2004-05 DARPA Grand Challenge using stereovision technology. Based on his experience during this challenge, Hall recognized the limitations of stereovision and developed the HDL64 high-resolution LiDAR sensor. More recently, Velodyne has released its compact, lightweight HDL 32E sensor, available for many applications including UAVs, and the new VLP-16 LiDAR Puck, a 16-channel real-time LiDAR sensor that is both substantially smaller and dramatically less expensive than previous generation sensors. Since 2007, Velodyne’sLiDAR division has emerged as a leading developer, manufacturer and supplier of real-time LiDAR sensor technology used in a variety of commercial applications including autonomous vehicles, vehicle safety systems, 3D mobile mapping, 3D aerial mapping and security. For more information, visit http://www.velodynelidar.com. For the latest information on new products and to receive Velodyne’s newsletter, register here.