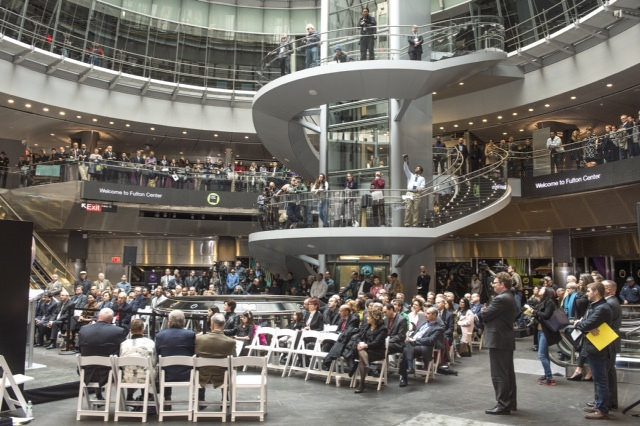 The Fulton Center is now open to the public and it’s already a major hit!

Located at the crossroads of Lower Manhattan on Broadway between John and Fulton Streets, this fully digital transit and retail hub will serve as New York City’s next great public space and integrates architectural ingenuity that fuses history, art, and sustainable engineering.

“The new Fulton Center complex is another example of how we are rebuilding Lower Manhattan which will spur a resurgence throughout the area,” Governor Cuomo said. “This new station makes traveling easier for subway riders, and is a beautiful public space for visitors and commuters to enjoy. We now have a new cornerstone in Lower Manhattan, and I am proud to see this unique complex opened to the public.”

The $1.4 billion Fulton Center project was funded with $847 million from a special Congressional appropriation granted after September 11, 2001. Known as the Lower Manhattan Recovery Grants, those funds were intended for local transit agencies to repair, replace, and enhance transportation infrastructure in Lower Manhattan. The MTA provided $130 million in local funds. The project also received $423 million from the American Recovery and Reinvestment Act (ARRA), the largest single award for the Federal Transit Administration’s ARRA projects.

Encased in a glass and steel shell, the bright and modern facility dramatically improves the commuter experience and will accommodate up to 300,000 daily riders using the

lines. Construction of the Fulton Center includes restoration of the 125-year-old Corbin Building, which will provide additional public access to the facility. The Fulton Center will house nearly 66,000-square-feet of revenue generating retail and commercial space and the MTA’s largest digital media program, both of which are being managed and operated by Westfield Corp., an international developer and operator of iconic retail properties and a leader in digital sales and sponsorship.

“This building stands as a testament to the strength and resilience New York showed on 9/11 and every day since. And it stands as a testament to what smart investments in infrastructure can do to improve a city, a state, and even a nation,” said MTA Chairman and CEO Thomas F. Prendergast. “It shows what we can do for our customers and our region when we invest in transit, and it shows New York is still thinking big and building big. Great cities like New York need great public spaces, and I’m proud to see this new symbol of our city’s strength open its doors.”

lines. Connecting subway lines that were borne out of the competing IRT, BMT, and IND companies resolve a century old conflict to better reflect traveling patterns and needs that are in the interest of today’s commuters. In-station transfers that were cumbersome and difficult to navigate between the numerous subway lines have been transformed into a brightly lit concourse with sweeping sightlines.

“This new transit hub will go a long way toward enhancing the travel experience of hundreds of thousands of customers.  They will finally benefit from a thoughtful design that vastly improves passenger flow throughout the station, minimizes congestion and makes transferring far easier than ever before,” said New York City Transit President Carmen Bianco. Our customers will also benefit from the addition of another fully ADA-compliant station to the growing network of stations in our subway system and everyone will reap the benefits from the many technological features the station offers.  It’s a hub built in the 21st century for the 21st century and beyond.”

line, built outside of fare control, and ultimately to PATH trains at the World Trade Center complex. These transit options will expand to include transfers to the

when the World Trade Center Transit Hub opens, and the

line once the Cortlandt Street Station is rebuilt.

In order to ensure the new complex is accessible to all of our customers, ten escalators and fifteen American with Disabilities Act (ADA) elevators have been installed. The public restroom facilities include two ADA accessible bathrooms on the concourse and the street level.

Westfield will be subletting the commercial space in the facility and leasing the digital advertising. The firm will manage the retail/commercial space plus some 60,000-square-feet of public circulation areas and 63,000-square-feet of mechanical and other “back-of-house” space. This includes the majority of the non-station areas of the Fulton Center complex, most prominently, the new glass and steel Fulton Building at the southeast corner of Broadway and Fulton Street; the historic Corbin Building at the northeast corner of Broadway and John Street; the Dey Street Head House at the southwest corner of Broadway and Dey Street; and the concourse under Dey Street that will connect to the future World Trade Center PATH Station. With limited exceptions, Westfield will be responsible for, operating and maintaining the space and making required repairs throughout the lease term.

The Fulton Center will be the only all-digital signage transit hub in New York City, housing the MTA’s largest state-of-the-art digital signage media program with an extensive network of over 50 screens to host advertising campaigns that will also be managed and operated by Westfield. For the first time in the MTA system, a site-specific digital arts program will be employed at the complex, which is being managed by MTA Arts and Design.

A series of screens will be dedicated to MTA customer information including service advisories and train arrival information. In the case of an emergency, the MTA has the ability to override all displays to provide relevant information. The Fulton Center’s state-of-the-art customer information system also includes 16 interactive On the Go! Kiosks. The sleek, stainless steel kiosks feature large screens offering customers information about their entire trip, from planning with Trip Planner+, real-time service status, escalator & elevator status and local neighborhood maps. As added features, the screens provide news and weather information.

The centerpiece of Fulton Center includes a 53-foot-diameter glass oculus over a grand atrium. Suspended under tension within the atrium’s conical form is the “Sky Reflector-Net”, an integrated artwork by James Carpenter Design Associates (JCDA), Grimshaw Architects and Arup. The artwork, commissioned by MTA Arts & Design, is composed of 112 tensioned cables, 224 high-strength rods and nearly 10,000 stainless steel components. Attached to the soaring cable-net are 952 aluminum panels optimized to distribute year-round daylight and reflect natural sunlight down into the lowest levels of the building. Fulfilling its civic purpose, the artwork combines beauty and function, reduces energy consumption and powerfully connects daily transit users with a tangible sense of daylight.

The Fulton Center is in the process of qualifying for LEED certification. Fulton Center offers increased daylight and views along with reduced urban heat island effect through reflective roof surfaces. Environment-friendly features reduce potable water use by 30 percent and energy demand by 25 percent compared to a baseline building of a similar type. More than 20 percent of materials used in construction were sourced locally and made of recycled content. By minimizing energy and water use, the amount of greenhouse gas emissions will be reduced and cleaner air provided for all New Yorkers. Fulton Center is equipped with the latest in electrical, HVAC and sprinkler systems, and houses four Con Edison transformers and network protectors.

Construction of the Fulton Center also included the restoration of the Corbin Building. Built in 1889, the Corbin Building was originally designed by Francis Hatch Kimball, and was named for Austin Corbin, a former President of the Long Island Rail Road. It was added to the National Register of Historic Places in 2003. The Fulton Center project preserved the historical landmark with $59 million in renovations including major structural underpinning, and refurbishment of the interior and façade. The Corbin Building provides an additional street level entrance to the Fulton Center on John Street. At this entrance, escalators are available to bring commuters and shoppers down to the concourse level of the facility to access the Dey Street passageway, retail shops, and the A/C mezzanine.

“Integrating an historic century-old office building with a modern, state-of-the-art transit and retail hub presented significant challenges for both our design and construction teams,” said Dr. Michael Horodniceanu, president of MTA Capital Construction, whose organization is responsible for the MTA’s four megaprojects, including the Fulton Center. “From making sense of the former maze that confused even the most seasoned subway customers to shoring up the foundation of the Corbin Building, our project team came through in splendid fashion. The Fulton Center rivals the world’s most exquisite transportation facilities.”

The project team was faced with many challenges unique to its location during project construction. The area around Fulton Center is extremely congested and there was limited availability of space to move equipment and workers around. Performing construction in such conditions required creative ways to stage work. Contractors used mini-piles to underpin the Corbin Building. The piles were installed by hand because large machines could not be used in such a confined space. The pits for the new foundation were also dug by hand with picks, shovels and buckets. The Corbin Building was rigged with motion sensors and other monitors to detect any building movement during work activities.

Construction of the Fulton Center set the bar for working harmoniously in an intense urban environment.

During construction of the complex, a pedestrian underpass was dug in the oldest section of the city without curtailing service to nine subway lines or interrupting electric, gas and communications utilities. Heavy equipment had to be moved into a neighborhood where traffic was already backed up by the ongoing reconstruction of the World Trade Center one block to the west. The work competed with other construction sites in the area, like a high-rise office building and a college dormitory to the south and east. Superstorm Sandy complicated matters further in 2012, rendering the entire site impassible for weeks.

Fulton Center has received numerous accolades recognizing the multifaceted elements of the project, including the New York State Society of Professional Engineers Project of the Year Award in 2014; the Diamond Award in the environmental category from the American Council of Engineering Companies of New York awarded in 2014; the New York Landmarks Conservancy Lucy G. Moses Stewardship Award in 2013; and a Commendation from the 2014 Brunel Awards, which recognizes excellence in architecture and design in railway–the only project in the U.S. to receive such recognition.