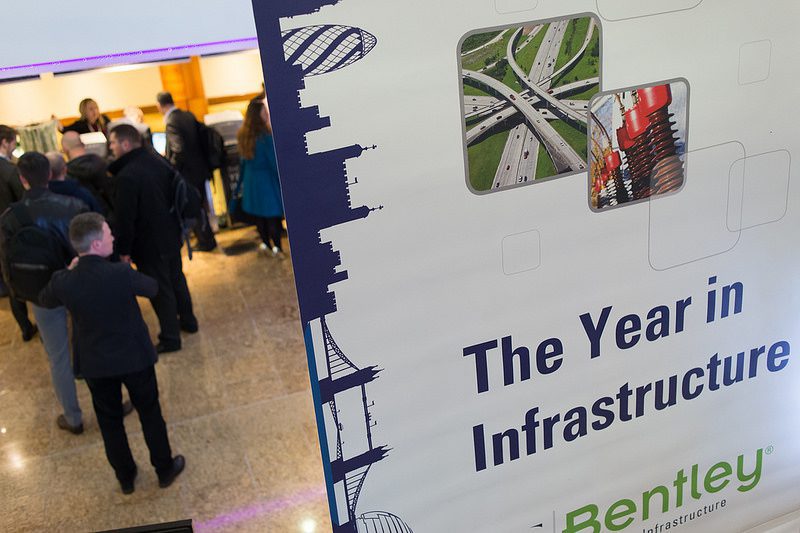 LONDON, Nov. 6, 2014—Bentley Systems, Incorporated, the leading company dedicated to providing comprehensive
software solutions for sustaining infrastructure, today announced the winners of the 2014 Be Inspired Awards. The awards honor the extraordinary work of Bentley users improving the world’s infrastructure. They were presented last night at a ceremony during The Year in Infrastructure 2014 Conference, held 4-6 November in London, United Kingdom. This global gathering of leading executives in the world of infrastructure design, construction, and operations featured presentations and interactive sessions exploring the intersection of technology and business drivers, and how they are
shaping the future of infrastructure delivery and investment returns. It was also attended by more than 100 members of the media from leading publications around the globe.

Special guest keynoters included:
• Professor Andrew McNaughton, FREng, Chief Engineer and Technical Director, HS2 Ltd. Andrew McNaughton has been with HS2 Ltd since 2009, developing the principles, network, and specific route design for high speed rail in Great
Britain.
• Ed Merrow, Founder and President of Independent Project Analysis, Inc. Ed Merrow is a globally recognized subject matter expert in the execution of large and complex megaprojects and capital projects in general.During the awards ceremony, 18 Be Inspired Awards winners and seven Be Inspired Special Recognition Awards winners were acknowledged. In addition, this year’s recipient of the Bentley Educator of the Year award, Artur Krawczyk, Ph.D., a lecturer at AGH University of Science and Technology, Kraków, Poland, was acknowledged.

Nine independent panels of jurors, comprising distinguished industry experts, selected the Be Inspired Awards winners from 54 project finalists. These finalists had been previously chosen from submissions by organizations in 49 countries.
Candidates for Bentley’s Be Inspired Special Recognition Awards were selected by the jurors from the top finalist projects as well as other exemplary nominations. This selection was based on the projects’ uniquely innovative and visionary achievements that transcend the narrower focus of the standing Be Inspired Awards categories. The nominees were then reviewed by a panel of Bentley executives, who evaluated them based on the criteria established for each award.

Bentley Systems CEO Greg Bentley said, “Our conference this year has been filled with insightful presentations and productive dialogue about BIM advancements. The effective strategies behind these advancements are helping infrastructure organizations achieve better performing assets through increased depth of information modeling and better performing projects through increased breadth of information mobility. Last night, during our 2014 Be Inspired Awards ceremony, we celebrated extraordinary examples of these BIM advancements at work in the delivery and operations of inspiring buildings, roads, utilities, and more. I thank and congratulate this year’s Be Inspired Awards winners, along with all of our nominees, for their valuable contributions to sustaining infrastructure and improving quality of life around the world.”

The Be Inspired Special Recognition Awards winners for 2014 are as follows:

The Be Inspired Awards winners for 2014 are as follows:

Innovation in Land Development and Management

Innovation in Mining and Metals

Innovation in Rail and Transit

Innovation in Utilities and Communications Networks

Innovation in Water, Wastewater, and Stormwater Network Modeling and Analysis

Bentley Systems has posted highlights of this year’s winning projects and finalists on its website at www.bentley.com/beinspired2014winners. In addition, it will include detailed descriptions of all nominated projects in the print and digital versions of the 2014 Infrastructure Yearbook, which will be published by year’s end. To review the past 10 editions of this publication, which together feature more than 2,300 world-class projects recognized in the Be Inspired Awards program since 2004, visit www.bentley.com/yearininfrastructure.

Since 2004, the Be Inspired Awards competition has showcased excellence and innovation in the design, construction, and operations of architecture and engineering infrastructure projects around the world. The Be Inspired Awards is unique – the only competition of its kind that is global in scope and comprehensive in categories covered,
encompassing all types of infrastructure projects. In the awards program, which is open to all users of Bentley software, independent panels of industry experts select finalists for each category. For additional information, visit www.bentley.com/BeInspired.Bentley’s Year in Infrastructure 2014 Conference, which took place this week at the
Hilton London Metropole in London, U.K., was a global gathering of leading executives in the world of infrastructure design, construction, and operations. The conference featured a series of presentations and interactive workshops exploring the intersection of technology and business drivers, and how they are shaping the future of infrastructure
delivery and investment returns. The Year in Infrastructure 2014 Conference included: the Project Delivery Summit, the Infrastructure Asset Performance Summit, the Building Forum, the Rail and Road Forum, the Oil, Gas, Chemical, and Mining Forum, the EPC and A/E Forum, the Utilities Forum, the Visions for the Future Forum, and the Be Inspired Awards finalists competition and ceremony recognizing the award winners. In addition, on Nov. 3, more than 100 journalists from leading media outlets around the globe gathered at the Hilton London Metropole for Bentley’s annual Media Day briefing.

Founded in 1984, Bentley has more than 3,000 colleagues in over 50 countries, more than $600 million in annual revenues, and since 2006 has invested more than $1 billion in research, development, and acquisitions. Additional information about Bentley is available at www.bentley.com