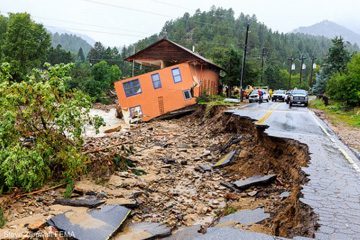 DENVER, Oct. 30, 2014—The severe flooding that devastated a wide swath of Colorado last year might have been less destructive if the bridges, roads and other infrastructure had been upgraded or modernized, according to a new study from the University of Colorado Denver.

“People need to understand the importance and seriousness of infrastructure,” said Jimmy Kim, PhD, associate professor of structural engineering at the CU Denver College of Engineering and Applied Science and lead author the study. “There is an assumption that a bridge will stand forever and that’s simply not true.”

Kim along with co-authors Wesley Marshall, PhD, PE and Indrani Pal, PhD, both assistant professors of civil engineering at CU Denver, the leading public research college in Denver, examined the causes of the flooding and its impact on infrastructure.

The stage was set for the deluge when an unusual low pressure system generated a steady plume of monsoonal moisture flow from the Pacific Ocean toward Colorado’s Front Range communities.

The rain began on Sept. 9, 2013 and didn’t stop until the 16th. In just days, places like Boulder County received three-quarters of its yearly precipitation. Bridges collapsed, roads failed and homes were swept away.

According to the study, 120 bridges now need structural repair. Many were damaged by rushing water which washed out backfill soil and exposed bridge foundations.

“You can do that by upgrading existing piers (columns) supporting the bridge or changing current design approaches” he said. “The Colorado Department of Transportation is currently working on improving scour design for bridge structures.”

The researchers also suggested improving roads made of concrete or bituminous material like asphalt since they often disintegrate when flooded. Kim said fiber, nano-particles or polymeric admixtures could be added to these construction materials to increase tensile strength and flexibility while reducing cracking.

The study noted the successful use of geographic information systems (GIS) to help supply up-to-the-minute mapping and alerts about flood damage.

“The production of such data and maps extended well beyond the typical GIS community and included local news affiliates and even the City of Boulder itself,” said study co-author Wesley Marshall.

For example, on September 27, 2013, Boulder launched a `Community Flood Assessment’ crowd-sourced map using the Crowdmap application.  The city asked users to submit flood reports via the website or smartphone apps. They were also asked how deep the flooding was and if they lost power. Video and photos could be uploaded to locate the event on an interactive map.

“Such efforts were not only useful during the recovery efforts but will continue to be used toward helping increase the resiliency of Colorado during such events,” Marshall said.

Overall, the researchers revealed a much wider problem.

From 1980 to 2007, about 90 percent of all global disasters were caused by flooding either by rain, tsunami, hurricane or some other natural event.

At the same time, the American Society of Civil Engineer’s 2013 Report Card for America’s Infrastructure gave the country a dismal D+. The group said $3.6 trillion was needed by 2020 to address the most serious problems.

In Colorado, the report card says, 70 percent of major roads are poor or mediocre and 566 bridges are structurally deficient.

“Reconstruction is very expensive and should be the last resort,” Kim said. “But we can repair or strengthen existing systems less expensively. We are looking at a growing national problem, one that will only get worse if we ignore it.”

The study was published last week in the Proceedings of the Institution of Civil Engineers. It is available upon request.