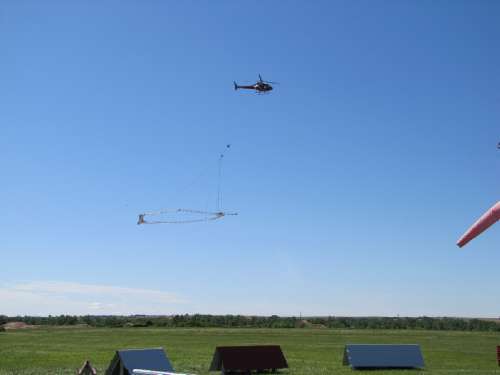 Citizens should not be alarmed if they see a low-flying helicopter towing a large wire-loop contraption hanging from a cable in the Poplar, Montana area during the next couple of weeks.

Starting on or about Tuesday, October 28 and lasting for five to 10 days, a low-flying helicopter under contract to the Ft. Peck Office of Environmental Protection and in cooperation with the U.S. Geological Survey, will begin collecting and recording geophysical measurements over the lower Poplar River Valley and surrounding areas for scientific research purposes.

The SkyTEM helicopter-borne geophysical system will collect measurements near the Poplar River Valley and surrounding areas that include the town of Poplar and Highway 2. The flight will cover an area approximately 10-miles-wide by 20-miles-long, and fly low to the ground back and forth to measure the electrical properties of the earth.

Data collected during this survey will assist USGS scientists to map the shale layer underneath the Poplar River Valley that limits groundwater movement, and in assessing potential effects from past energy development in the East Poplar oil field.  This survey is a follow-up to a similar helicopter-based study in 2004 of the same area and published in USGS Open-File Report 2006-1216.

The company conducting the geophysical survey under contract to the Ft. Peck Office of Environmental Protection is Native American Helicopters, based in Ft. Smith, Arkansas.  The helicopter is controlled by experienced pilots who are specially trained for low-level flying required for geophysical surveys.  The company works with the Federal Aviation Administration to ensure flights are in accordance with U.S. law.

More information about this project can be found here:
http://wy-mt.water.usgs.gov/projects/east_poplar/index.html
http://www.fortpeckoep.org/activities_east_poplar/project_3.html