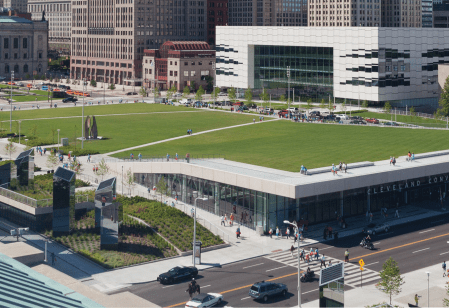 Key findings of Turner’s 2014 Green Market Barometer show that companies remain committed to constructing green buildings and value the financial benefits they provide building owners and occupants. Of increasing importance among survey respondents are the benefits that green buildings provide for employee health and wellbeing and for hiring and retention of employees.

“While building owners continue to incorporate green features in buildings to reduce operating costs, we see more organizations paying closer attention to the positive impacts of green buildings on indoor environmental quality and employee satisfaction and productivity.” said Michael Deane, chief sustainability officer. He continued, “We are also seeing, both in our own work and from the results of the survey, increased attention to maintaining essential building operations in the face of extreme weather events.”

The survey of more than 300 executives – who own or rent space or are involved in building design and construction – found the following:

Outlook for Construction Projects Remains Strong
Reflecting a positive business outlook, 65% of executives said it was extremely or very likely their organization would undertake a new construction project over the next 12 months, while 75% said the same about undertaking a renovation project.

Continued Importance Placed on Financial Benefits of Green Buildings
In deciding whether to incorporate green features, financial considerations were most often rated as extremely or very important. The financial factors most highly rated in the decision-making process to incorporate Green features in construction projects were energy efficiency, asking rents, ongoing operations and maintenance costs, and occupancy rates.

Attention to Benefits on Employees and Occupants is Increasing
Several non-financial factors were highly rated benefits of Green buildings including health and well-being of occupants, indoor air quality, employee productivity, impact on brand/reputation, and satisfaction of employees/occupants. Recognizing the importance of an organization’s reputation for sustainability in its ability to attract and retain talented employees, employee hiring/retention was rated as extremely or very important by 62% of executives, up from 49% in the 2012 survey.

Expanding Attention to Water Efficiency
Among other factors, a growing awareness of water as a finite, and sometimes scarce resource has prompted an increase in the likelihood that respondents would incorporate improved water efficiency into new construction and renovation projects, up from 57% in 2012 to 71% this year.

Increased Focus on Building Resiliency
The ability to maintain or quickly resume operations in the event of extreme weather conditions such as hurricanes, tornadoes, floods, and drought have made building resiliency a priority of executives. In the survey, 66% of executives said achieving resiliency is extremely or very important when their organization designs, constructs, or operates a building.

Rising Importance of Material and Supply Chain Transparency
For the first time, more than half of the executives said the level of a vendor’s sustainable practices was extremely or very important for their organization when choosing a supplier of goods and materials (56%) or a service provider (52%). These figures have climbed steadily since 2010, when they were 43% for suppliers and 39% for service providers.

Green Building Rating Systems
Respondents expressed a continued interest in obtaining LEED certification on construction projects. Additionally, respondents expressed a significantly increased interest in alternative rating systems such as Green Globes, EnergyStar, Living Building Challenge and others, with 43% of respondents saying they would be extremely or very likely to seek alternative certification, significantly more than the 2012 number of 17%.